The petite gives her winter-white cable-knit sweater a trendy lift with suede lace-up wedges by Coach while departing from LAX.

Already flying high off their recent engagement, the couple takes off for Mexico in their warm-weather finest, with high-fashion neutrals, including a Elizabeth and James blazer for and a fedora for him, at LAX.

Following Christmas in her native England, the L.A.-based suits up in black, arriving at LAX wearing an oversized blazer, leather leggings and platform pumps.

The jewelry designer lets her tough side shine at LAX, pairing motorcross blue jeans with a leather shearling jacket and classic aviators.

With in classic corduroy and denim and sporting a versatile blazer and maxi, the Australian couple return to Sydney with their most important must-have: adorable daughter, Sunday Rose!

Keeping her Clark Kent-worthy frames on, the takes to the skies in a black leather-piped Coach cape with turnlock detail and a cream quilted carry-on in London.

On her way to a sexy Mexican getaway, the is angelic in creamy white and a luxe camel tote.

Arriving in a chic Theory coat and a wide smile, the Harry Potter returns to England following her finals at Brown. “Exams all done. Great to be back home in the UK, feeling very christmassy – I have the most amazing tree!” she Tweeted the next day.

Wrapped up in all black topped off with a sharp fedora, touches in down in Florida with her New York City swagger intact.

Looks like long-mane is also flipping out for patterns, throwing a colorful tribal-printed bag and blue plaid shirt into the mix with his basic rugged-yet-polished attire at LAX.

It’s all in the accessories for the Gulliver’s Travels , who tops her leather jacket and jeans with a vkoo loop scarf and a Coach satchel at LAX.

fellow returns to LAX with a little Parisian flair, adding a printed blazer over slim pants and feminine loafers – and a bag of macarons!

Flashing a smile from under his fedora, the Fringe actor lightens things up at LAX in cargo jacket with a two-tone briefcase in hand.

The Roommate star layers on her knits, with a puffer along for the ride to N.Y.C., before takeoff from LAX.

Before rockin’ the red carpet with her new blunt bangs and shimmering gown, the Golden Globes worked the floor-length look at LAX in a shearling coat and equally cozy knit tunic.

There’s blue skies ahead for the who flashes her engagement ring while making a soft landing in a furry dove gray coat and black suede boots in Berlin.

The streamlines her business approach in a sleek blazer and vest set with cuffed buttondown and booties at Heathrow.

Eye spy a star in stripes! The bespectacled stays under cover in black and white while jetting out of LAX.

The British model gets sassy stateside in a velvet blazer and jeggings with leopard scarf and metallic sandals for her arrival at LAX.

From Los Cabos to Los Angeles, the Little Fockers keeps her physique under wraps in striped cardigan, matching tunic and leggings with a platinum Ralph Lauren tote in arm.

On winter break from classes, the Brown University takes her collegiate style to LAX, throwing a double-breasted pea coat over a striped top on New Year’s Eve.

It’s a looking like a bright new year for the reality star who gets ready to kick off 2011 Vegas-style in shiny thigh-high boots, shimmering hoops and sleek aviators at Sin City’s Burbank Airport.

The Burlesque star generously wraps up her curves in a luxurious overcoat with furry-trim collar and cuffs while rolling through LAX with her sequin Dolce&Gabbana purse and suitcase in hand.

Also fresh off a Mexican getaway, the newly engaged trades her red-hot bikini for winter white, at LAX.

Following their holiday trip to Disney World, the casually-clad and her let pup pal Marlo lead the way through LAX.

Meanwhile, Twilight heads back to work, giving a small wave goodbye at LAX from under her knit hat and cozy carry-ons.

Ready to give a run for his money, the Twilight star also heads out of LAX in a leather jacket, fedora and wayfarers.
More Airport Style Stars > 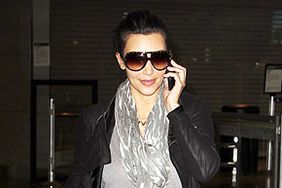 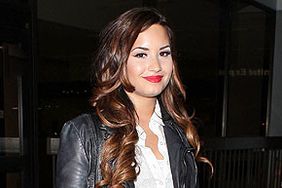 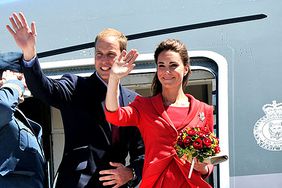 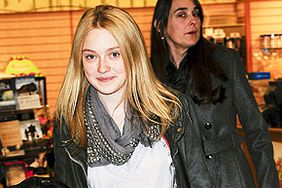 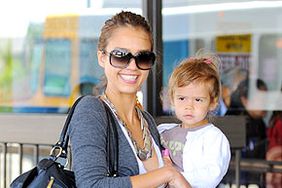 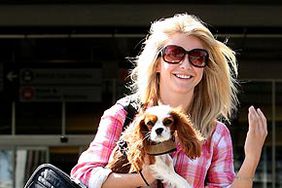 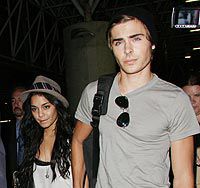