Lions and tigers and Louis Vuitton, oh my! Returning from her romantic Italian getaway with new beau Eric Johnson, continues her wild style streak at LAX in a safari-inspired maxi dress with a matching leopard-bottomed purse.

Not to be outdone by her big sis, the adds pop to her loafered steps at LAX with her own bright orange arm candy, including a Louis Vuitton graffiti bag and a See by Chloé messenger bag.

She’s a stud from head to toe! gets ready to test out the security with her metal accessories, including a link necklace, spiked oxford shoes and cobalt Alexander Wang purse in Los Angeles.

With his suspenders down, collar up and baseball cap backwards, the strikes a pose in gray and black in Los Angeles.

It’s Bon voyage for the French actress, who departs LAX in a sharp-shoulder textured blazer, printed camisole and tiered skirt.

The gets tied up at Heathrow in a charming bow-print frock and matching suede heels.

Clad in a cuffed denim jacket, tied scarf and zippered tan sandals, the mom-to-be flies united with her chic husband, who adds suede boots to his blazer and khakis, at LAX.

The Big Love actress keeps it short at LAX in a summer plaid and ruffle-hemmed tunic with barely-there denim cutoffs and lace-up boots.

The latest perfumer pairs her seasonless suede boots with white jeans and an oversized sweater vest at LAX.

While keeps it simple in a waist-cinched dress and Tkees flip flops, it’s her kids that steal the fashion show – from Maddox’s one-shoulder pack and Zahara’s pop of color to Pax’s linen suit and Shiloh’s boyish basics at Narita International Airport.

Leaving her Jackie O costumes behind, The Kennedys is a chic blues traveler, adding brown accessories and retro frames to an all-denim outfit for her arrival in NYC.

Following their secret Italian wedding, the and return to LAX incognito, in a printed scarf and Cesare Paciotti purse for her and linen pants and slip-on sneakers for him.

The Other Guys allows her feminine side to bloom in a ruffle-trimmed Madewell dress, blush Dior bag and Lucite Prada shades at LAX.

Marriage is bliss, baby! lights up LaGuardia Airport in a trendy oversized vest, chain-strap purse and rose gold flats while toting her other main man, her pooch Ace.

Check out that body after baby! With daughters Lou and Leni on hip and hand, the flaunts her toned tummy while hotsteppin’ through JFK in buckled-up boots.

The Charlie St. Cloud shows how he does business, pairing a black skinny tie with a chambray shirt and slip-ons while filing through LAX.

Following her Mediterranean vacation with boyfriend , the Footloose stays relaxed in a loose tunic over denim capris and House of Harlow 1960 pendant at LAX.

It’s always an adventure for the , who navigates her pink and orange-clad brood through the Philadelphia Airport in a quilted vest and denim skirt following a family vacation to Alaska.

Ah, that newlywed glow! Sporting matching grins, the happy couple layer up with show of red underneath dark neutrals for and a cozy scarf and blazer over a maxi dress for her for their flight back from London.

Ready to depart from the golden coast, the California shows off her summer colors in a yellow tunic over sheer leggings and studded jelly peeptoe flats.

In destroyed jeans and a patched-up shirt, the Charlie St. Cloud makes rough around the edges look totally polished.

Following behind the scruffy faces of Hollywood’s leading men, shows off some stubble of his own from under a white fedora with basic knits and roughed up brown boots at Sydney Airport.

Don’t mess with military luxe at its best! The world’s fiercest pop star goes Down Under in army green tweed jacket with glittering quilted purse and sleek platform boots at Melbourne Airport.

makes for one easy rider at LAX, rocking a 3.1 Phillip Lim leather jacket over his shoulder paired with white oxfords.

This Twilight looks happy to see the light of day, perking up with a yellow button-down cami, buckled booties and some tunes at LAX.

They just moved in together, but the couple is ready to take off in simply sexy basics at Burbank Airport.

What’s in the bag?! Following a stylish turn at the Teen Choice Awards, Emma keeps her comfy outfit glam with a shiny lilac satchel while departing LAX. 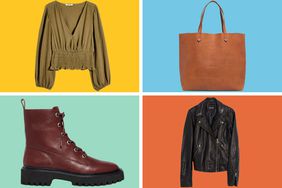 Madewell Just Marked Down Every Item on Its Site, Including Best-Selling Jeans and Tote Bags 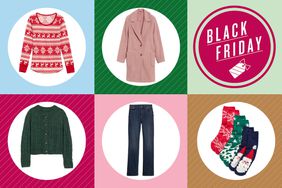 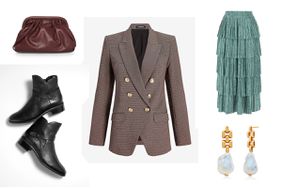 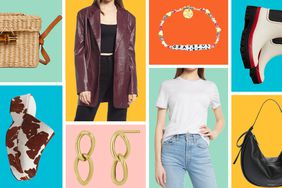 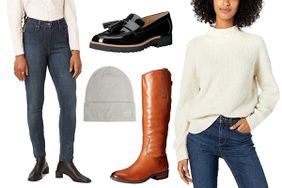