There won’t be any golden capes or horned headpieces, but Madonna‘s MDNA tour costumes promise to be sexy, seductive — and sometimes, super small.

The Material Girl’s tour kicks off in Tel Aviv on Thursday, and for the occasion she’ll be wearing provocative looks from the likes of Jean Paul Gaultier, Jeremy Scott, Hervé Léger by Max Azria and Alexander Wang with shoes from Prada and Miu Miu. Dolce & Gabbana is dressing the band and background vocalists, Fausto Puglisi created vests and masks for backup dancers and J Brand designed custom-made jeans, WWD reports. Shoes and lingerie from Madonna’s new Truth or Dare collection (below) will be featured in the show, as well.

“It’s a real journey from the first act to the fourth, and the way she constructs her show is like a theater piece,” costume designer Arianne Phillips tells WWD. Phillips, who’s supervised costumes on Madonna’s past four tours, created a few looks for MDNA, including a cheeky majorette ensemble (left). “It’s inspired by a 1940s majorette and I was looking for something playful and fun,” she explains.

Other highlights include a Gaultier original: a white shirt, black tie, opera-length black gloves and a leather corset (right), all of which reference the iconic bustier and pin-striped suit the designer made for Madonna’s 1990 Blond Ambition tour.

“When she asked me to do a costume for her for this tour, I couldn’t refuse,” Gaultier tells WWD. “We played with the ideas of a suit and a corset. But the corset is now like a cage. [It’s] a nod to the conical bra corset of the Blond Ambition tour but reinterpreted in 3-D. It’s all about masculine and feminine.”

It’s all about pushing boundaries, too; according to Phillips, “This show is epic and bigger than anything [Madonna’s] done before. There are many more costume changes. Madonna changes outfits seven or eight times and the dancers change 10 to 15 times, depending on the dancer.” And hopefully they have lots of suitcases; the footwear alone is enough to fill a small plane. According to Phillips, “We’re taking 700 shoes on the road.” Are you planning to catch the MDNA tour?

SEE WHAT STARS ARE WEARING ON SET IN ‘LIGHTS! CAMERA! FASHION!’

Janet Jackson's Unbreakable World Tour: All the Scoop on Her Giuseppe Zanotti–Designed Shoes 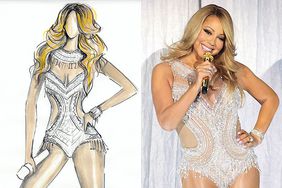