Shanna Moakler Gets Her Tattoo of Travis Barker's Name Removed in New Video: 'It's Worth It'

Shanna Moakler is bidding farewell to her Travis Barker tattoo.

On Friday, the model and actress, 46, shared a video of herself getting the Blink-182 drummer's name lasered off her wrist during a tattoo removal session with Los Angeles-based skincare expert Nurse Jamie.

"It's my ex's name," Moakler says in the clip. "Don't tattoo names on your body, kids."

Moakler then receives several lidocaine injections before putting her arm underneath a Lumenis PiQo4 machine.

"If the Ironman and the Flash had a baby that did tattoo removal in a picosecond, which is one trillionth of a second … i.e. superfast … they would name it the PiQo4," Nurse Jamie tells PEOPLE of the procedure.

After some of the design is burned off with a laser, the former Miss USA remarks, "That is intense, but it's worth it!"

"Bye bye, tattoo," she says. "I think we'll probably only need one more session on this tattoo, and I think I'll be good."

Moakler's video comes just days after Barker, 45, debuted a new tattoo of the phrase "I love you" written in girlfriend Kourtney Kardashian's handwriting.

In multiple photos and videos shared to Kardashian's Instagram, the Keeping Up with the Kardashians star can be seen tattooing the phrase on Barker's forearm.

In April, Barker first made his affection for Kardashian permanent by inking her first name on his chest, directly above his left nipple.

Moakler, who was married to Barker from 2004 to 2008 and shares three kids with the musician, recently told PEOPLE that she finds their PDA "weird," but she has "no ill will" toward the couple.

"I'm very much over my ex. It's been a long time. However, do I think some of the PDA that he's doing with her is weird? [Yes]," she said.

"The movie, True Romance, that I feel like they've been bonding over was the theme of our wedding. Our daughter's named after the character in the movie. Flying banners overhead like we did on Meet the Barkers. Stuff like that ... I just think it's weird," continued Moakler.

However, the pageant queen noted that she's "really, genuinely happy" for Barker.

"I want the father of my kids to be happy and to have a partner that makes him happy ... and a better father," she said. "As long as she's good to my children, that's truly all I really care about." 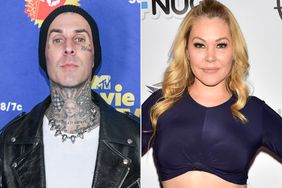