Selena Gomez Gets Bangs, Dakota Johnson Goes Back to Blonde: The Celeb Hair News We All Need Now

We love kicking off the week with some celebrity hair changes, especially when they're from stars who rarely mix up their manes. Below, check out the new dos on Selena Gomez and Dakota Johnson, and share your feelings in the comments.


Selena Gomez loves her long, brunette waves, so much so that we had to go way back in the archives to find her last major tress change (and even then, it was just extensions). So we're equal parts surprised and delighted by the pop star's new look, a layered, lighter style with a new row of fringe.

"bangs," she helpfully captioned the reveal photo on her Instagram, following up with another good look at her cut and the caption "Tried my best @sukiwaterhouse ?," referring to the British model who also rocks a piecey, slightly hipster-esque fringed do. Nude lips and smoky eyes completed the mod vibe. No word on whether it's for a role or just for fun, but we can't help wondering if maybe on-again, off-again beau Justin Bieber inspired her with his own Insta'ed cut?

Dakota Johnson also showed off a fun hair change, though in her case it was a new old look. She returned to the light blonde locks she had pre-Fifty Shadees of Grey filming, for which she went brunette. She's been rocking some variation of her Anastasia Steele-brown shade but progressively lightening up since filming wrapped, but she finally went all the way back to her mom's Melanie Griffith-blonde hue at the Stella McCartney presentation at London Fashion Week.

Loving both? One or the other? Glad to see them trying something new? Share below! 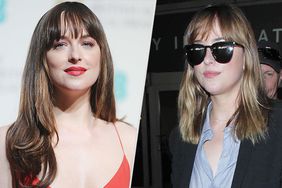 Sandra Bullock Goes Blonde (and Now We're Having the Great 'Is It a Wig?' Debate)

Jennifer Hudson's Got a Super-Short New Do, Dakota Johnson Updates Her Fringe and More Star Hair Changes to Wrap Up Your Week