He's rising up the fashion ranks

Rocco Ritchie is taking after his older sister, Lourdes “Lola” Leon, as a style-setting teen, and the duo joins an impressive group of fashionable siblings influencing the industry, including Jaden and Willow Smith, Kaia and Presley Gerber and Brooklyn and Romeo Beckham.

Rocco, the 16-year-old son of Madonna and Guy Ritchie, attended the Dazed and Calvin Klein party Thursday night to celebrate the magazine’s 25th anniversary with his rumored girlfriend Kim Turnbull (the granddaughter of artist William Turnbull).

But this wasn’t his first fashion outing! Just last month he was also spotted sans parents at the Love x Marc Jacobs party during London Fashion Week (also alongside Turnbull).

Rocco also secured a modeling job this year. He serves as a face for the Adidas x Alexander Wang collaboration, giving his best Blue Steel alongside seasoned pros like Binx Walton and Hanne Gaby Odiele among others.

And at just 16 years old, we have a feeling this is only the beginning for the star. After all he grew up with one of the most expressive style stars in history, so fashion is in his DNA. Plus, Madonna’s oldest child, Lola, is proof. She first got into the fashion business helping her mom launch Material Girl line for Macy’s in 2010. And this year she was named the face of Stella McCartney’s Pop Perfume.

In September, Madonna and Guy resolved a lengthy and highly publicized custody battle over Rocco after eight months in court. The teen continues to live with his father in London, but he’s also spending more time with his mom. Madonna has been bonding with Rocco lately, sharing Instagram posts of them dancing together and celebrating his new gig with Adidas.

What do you hope Rocco does next? 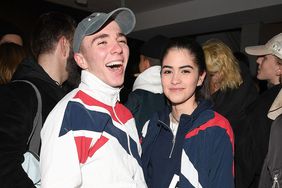