All About Spike Lee's Symbolic Oscars Look, from 'Love' and 'Hate' Rings to His Prince Tribute

The BlacKkKlansman director revived the rings from his 1989 film

Spike Lee is letting his jewelry do the talking at the Academy Awards.

The BlacKkKlansman director, 61, showed off two large knuckle rings — one emblazoned with “LOVE” and the other with “HATE” — as he walked the red carpet at the 2019 Oscars. The rings are a bit of movie history — they were important props during an iconic moment in Lee’s 1989 film Do the Right Thing.

In the scene, Radio Raheem, played by the late Bill Nunn, tells Lee’s character Mookie about the fight between love and hate, with his knuckle rings as the two sides caught in a boxing match for humanity.

“The story of life is this,” Radio says in the scene. “One hand is always fighting the other. Left Hand Hate is kicking much ass and it looks like Right Hand Love is finished. Hold up. Stop the presses! Love is coming back, yes, it’s Love. Love has won. Left Hand Hate KO’ed by Love.”

Lee, speaking to People TV on the Red Carpet Live special, said that the inspiration for the rings came from noir director and actor Robert Mitchum, who gave a similar speech with the two words tattooed on his hands in his 1955 film The Night of the Hunter.

“We gotta make a choice,” Lee said of opting for love or hate. “Which one will it be?”

Along with the rings, Lee wore an all-purple Ozwald Boateng suit in honor of the late Prince, and a custom-made gold, diamond and opal necklace in the singer’s trademark shape. He finished off the look with gold Air Jordan sneakers by Tinker Hatfield, commissioned by Michael Jordan.

Lee also wore the rings for BlacKkKlansman’s Cannes premiere in May 2018. The movie, which is nominated for Best Picture at the 91st Academy Awards, addresses similar themes of racial discrimination as his 1989 film.

Lee also earned his first-ever Best Director nomination for BlacKkKlansman. The film is up for six awards total during the awards show, broadcasting live from Los Angeles on Sunday, Feb. 24 at 8:00 p.m. ET/5:00 p.m. PT on ABC. 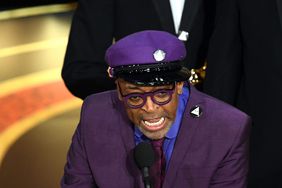 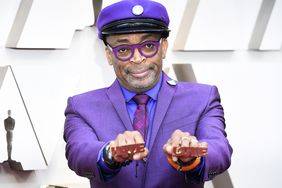 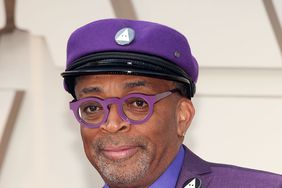 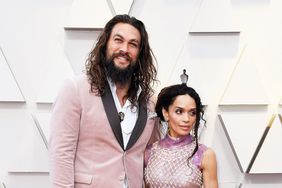