De Jager, 27, who is openly trans, paid homage to the late LGTBQ trailblazer with her teal embellished gown and colorful headdress at Monday's event. She wore a tulle Edwin Oudshoorn Couture dress emblazoned with pink, red and yellow flowers featuring a bow on the bottom reading "Pay it no mind," Johnson's response to questions she received about her gender.

All the Met Gala Red Carpet Looks You Have to See

De Jager accessorized her look with an eye-catching metallic and rainbow flower crown much like the floral hairstyles and accessories Johnson was often photographed wearing.

The NikkieTutorials YouTube star posted a photo of her Met Gala look on Instagram, where she wrote, "PAY IT NO MIND 🏳️‍ when I got asked to join the Met Gala(!!!!!) I knew I wanted to pay homage to a trans icon who was at the forefront of the Stonewall Riots."

She added, "Marsha P. Johnson paved the way for so many of us, and I hope I made my community proud tonight 🥺 this night has been so incredibly surreal…. I can't wait to tell you EVERYTHING!!!!!! 💕 WE DID IT GUYS!!!!!!!!"

De Jager thanked youTube and Derek Blasberg at the end of her post, calling the night "insane" and adding, "I'll forever be so grateful!"

Described as "an activist, self-identified drag queen, performer, and survivor" by the Marsha P. Johnson Institute, Johnson is widely considered to be "a prominent figure in the Stonewall uprising of 1969." Among her many achievements in activism, she created the Street Transvestite Action Revolutionaries (STAR) in 1970 with Sylvia Rivera. STAR was created to support trans youth experiencing homelessness in New York City, according to GLESN.

While Johnson was murdered in 1992 at the age of 46, her legacy lives on. Edwin Oudshoorn, who designed de Jager's Met Gala look, wrote on Instagram, "We came up with the idea of creating a tribute to the legendary Marsha P. Johnson and the whole looked started with the custom made characteristic flower crown."

Oudshoorn noted that the look featured "18k gold flowers, leaves and buds created by goldsmith Digna Gorkovoi, combined with handmade silk flowers & beading and a nod to Nikkies dutch heritage and our upcoming collection 'Thalassic' in the form of 'ear irons.' "

All the Stars Making Their Met Gala Debut This Year

De Jager came out as transgender in a YouTube video in January 2020, telling her followers, "[I'm] finally revealing a part of my life that has made me who I am."

"When I was younger, I was born in the wrong body which means that I am transgender. Now, so surreal saying this. Filming this video is scary but it feels so liberating and freeing," de Jager said, adding, "I am NikkieTutorials and I am Nikkie," she continued. "I am me. We don't need labels. If we are going to put a label on it, yes, I am transgender. But at the end of the day, I am me. And at the end of the day, you are you."

The makeup artist received an outpouring of support after coming out, with stars like Ariana Grande, Kim Petras and Amber Rose sharing their love for de Jager. 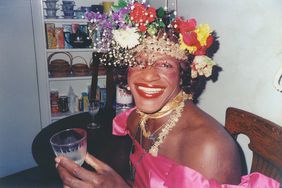