When Awkward's Molly Tarlov and Alexander Noyes got engaged in July 2015, they knew they wanted their wedding to be a reflection of their unique couples' vibe. And their March 4 wedding at Palm Springs' Colony 29 definitely was just that, with plenty of quirky custom details featuring a logo that represented them: a cactus and a rose. "We had a lot of mishaps and more than that, I couldn’t believe we put ourselves through all this stress when we could’ve gone to the courthouse and gotten a pizza!," Molly tells People. "But it was all worth it, of course!”

The actress didn't require formal bridesmaids dresses - "I just had my closest girls run their dresses by me before they chose! I wanted all of them in pastels but I'm from New York so we got a lot of black." - but she did get them all matching robes from Love Ophelia to wear while they got ready.

Molly says she tried on "approximately 1,000" dresses before deciding to go custom. "Women have so many different facets I think it's hard to pin down one style to stand up in front of everyone and marry the love of your life. But I finally got there and I knew it was perfect because I made it up!"

She also loved that the neckline showed off the necklace given to her by her husband-to-be that same day, and layered with her Leenabell necklaces featuring his name and initial. "My 'something old' was the earrings my dad gave my mom at their wedding. Something new was the heart-shaped diamond necklace my husband surprised me with during the first look. A couple weeks ago he said 'I'm gonna get you a heart shaped diamond one day,' and then he pulled it out during our first look, so that day was March 4, 2017! I definitely wasn't expecting it so soon and I can't wait to wear it forever. On a yellow gold chain of course!" she says. "Something borrowed was a beaded clutch my mom lent me me and my something blue was the fairy dust on my nails and my powder-blue Chanel shoes I changed into halfway through the reception ... also my husband's eyes!"

The star got to skip the makeup trials thanks to her friendship with Corina Rabichuk, whom she met on the set of Awkward. "I wanted the same smokey eye I always do and the only lip I ever wear, Buxom Lavender Cosmo." (That blushing-bride glow came courtesy of Lifted Skin.)

She also opted for a high pony to show off her Amaroq Design veil. "It was fun and I realized I had rarely, if ever, seen it on a bride before! Initially I was going to do half-up half-down, but we put it in a high pony during the hair trial and realized that was the way it was gonna go down! It felt like an updated version of Barbie's ponytail."

In addition to her Ritani engagement ring, Molly and Alexander exchanged yellow-gold bands ("classic but still unique and you can dress it up with sparkles over the years!") with an inscription special to them: "We Have, We Will, We're Forever Trill M&A."

Molly's dad officiated the ceremony, and her dog served as ring bearer. And of her husband's vows (which he recited wearing a suit he picked out, though she "nixed a couple of bow tie options,") Molly says they "were the most amazing things I've ever heard!"

Molly and Alexander both changed into new looks for the reception, though she went for a simpler look and he amped things up in a brocade three-piece suit and pink bow tie. "I love off the shoulder! It was the theme of my weekend (and life pretty much)," she says of her bridal style M.O.

The couple was feeling the love after the ceremony. "My husband was beaming when I came down the aisle. When I looked at him it was just like my teammate was once again standing there waiting for me at the end of the road," Molly says.

DO ME A FAVOR

The cactus and rose theme was visible throughout the wedding, up to these custom Pintrill enamel pins featuring the motif. "The most fun were the little things we stumbled upon deciding to do that really reflect us, like The Cactus and The Rose logo," she says. "I, of course, had a lot of fun putting pink roses anywhere possible!"

They even had the cactus and rose theme on their custom The Mighty Company jackets-slash-chair-backings. And though they're the picture of calm here, Molly admits to some jitters beforehand. "I was nervous about everything!! You can go to 100 weddings but you have no idea what it's going to be like to have your own," she says. "It's a strange thing to invite people to a giant party celebrating you! I was also most excited about the same thing though, to throw a party for everyone we love: past, present and celebrate our future."

The whole night's romantic vibe was coordinated by Moonmilk Events, who helped the couple focus on what was important. "After a while of being confused as to where to start we honed in on what we really wanted: We wanted all the people we love to have a dope time and obviously, lots of pink!" Molly says. "Everything was so beautiful, I loved the pink linens and florals with the checkered dance floor."

The couple hit the dance floor to the Zombies' "This Will Be Our Year," found by some serendipitous Spotify action. "We chose it because I woke up one morning with 'Time of the Season' stuck in my head so we put it on...then we let Spotify keep playing and when we heard the song we both knew it was going to be ours."

The couple's friends returned the favor with "extraordinary" toasts, Molly says (and likely lots of funny photos in the photobooth, supplied by Classic Photobooths). "I just had a great time! Seeing everyone we love all together in basically my dream house. Plus, I hadn't eaten bread in a while so it was great to dive into some sourdough." 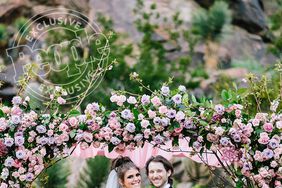 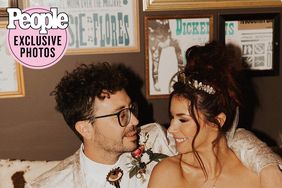