The former first lady told PEOPLE last year that, once you get hooked on knitting, it's a "forever proposition"

Michelle Obama picked up knitting during the COVID-19 pandemic and is already at pro-level, making garments for her whole family!

During an interview with Gayle King on Monday's episode of CBS This Morning, the former first lady, 57, gave an update on her favorite hobby, sharing that she recently knitted husband Barack Obama a crew neck sweater.

"Don't get me started because I don't want to bore people with my little knitting," Mrs. Obama teased.

The former president hasn't worn his wife's design just yet, but "he will," she said with a smile. "It was finished when it got a little warmer. So, it's ready for him."

"I made halter tops for [daughters] Malia and Sasha that they love," she continued.

"There's something special about that...to know that mom made this for me," King, 66, said. To which Obama agreed, "Yes. It is good. It's good."

Earlier this year, the Becoming author told PEOPLE that, once you get hooked on knitting, it's a "forever proposition."

"You don't master knitting because once you make a scarf, then there's the blanket. And once you do the blanket, you got to do the hat. You got to have the socks," Mrs. Obama explained. "I'm currently working on my first crew neck sweater for my husband. So I'm figuring out how to make sleeves and a collar and pick up stitches. So I could go on about knitting!"

If you're impressed that Mrs. Obama has already mastered knitting, so is the former president.

While speaking about her hobby last year, President Obama remarked, "I told her the other day, 'It's weird how good you've become at knitting,' because she making sweaters and you know — you expect if somebody's just taught themselves to knit, then maybe they work their way up to a scarf and that would be a big deal. But she plowed through the scarf thing in a month and now suddenly there's halter tops and scarves and hats and mittens and I'm astonished." 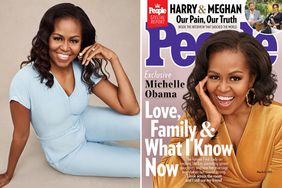 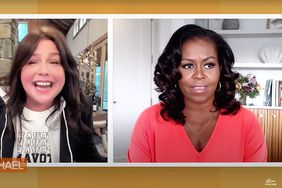