Kylie Jenner hit the 2019 Met Gala red carpet alongside her sister, Kendall Jenner, in coordinating feathery Versace outfits that sparked a lot of pop culture comparisons. Many thought they resembled the characters in White Chicks, the evil Step Sisters in Cinderella and even… Lil’ Kim.

Kendall arrived in an orange, feathered gown, accessorizing with Tiffany & Co. jewels, while her makeup mogul sister, 21, chose a head-to-toe lilac number. And thanks to the mermaid-style fit, see-through accents, scalloped neckline and purple wig, many compared her look to Lil’ Kim’s iconic purple outfit worn to the 1999 MTV Video Music Awards.

Throughout the night Twitter users were quick to make the comparison between Kylie’s curve-hugging gown and Lil’ Kim’s printed long-sleeve jumpsuit worn with a pastie over her left breast.

On the carpet, Kendall explained that she and Kylie were involved in the design process with Versace before the big night. “We kinda decided to go for it. Kylie and I worked on it and we came up with a fun vibe with Donatella [Versace],” Kendall told E! “My dress has a lot of feathers at the bottom, so I almost tripped myself but, yeah.”

Added Kylie: “I can’t breath a little bit, but I feel good.”

Their looks were a nod to the 2019 gala’s theme “Camp: Notes on Fashion,” inspired by Susan Sontag’s 1964 essay, “Notes on Camp,” which describes camp as “love of the unnatural: of artifice and exaggeration.”

Kylie appeared to hint at what her Met Gala look would be hours before the event when she tweeted a quote from Sontag’s essay: “‘The hallmark of Camp is the spirit of extravagance. Camp is a woman walking around in a dress made of three million feathers.’ #MET.”

The duo’s embroidered feathery designs sparkled other comparisons too.

First, Marlon Wayans, who starred in the 2004 comedy White Chicks, pointed out that the superstar sisters’ gowns looked just like outfits the characters wore in the movie during a runway show scene. “White chicks 2… it writes itself,” he wrote on Instagram with a side-by-side pic.

On Kendall’s Instagram Story, she posted a photo of the evil twin sisters from the 2004 movie Ella Enchanted (which starred Anne Hathaway) and the step-sisters from the 1950 Disney animated film Cinderella.

“Kylie and Kendall rolling up to ruin Anne Hathaway’s night,” one user wrote on Twitter. Another added, “Kendall and Kylie look like Disney Villians and I’m living for it.

Kendall also shared a photo of Jim Carrey and Jeff Daniels in the 1995 film, Dumb and Dumber, wearing blue and orange matching suits.

Later on in the night, Kendall and Kylie both did an outfit switch for the A-list afterparty.

Kylie changed into a bright turquoise wig and matching sparkly blue mermaid-inspired gown adorned with with a feathered trim.

“The after party,” she captioned the post, adding a mermaid and butterfly emoji.

As for Kendall, she arrived in a plunging printed suit jacket with matching mini skirt, a silver clutch and black pumps. 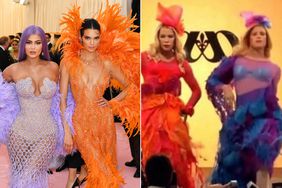 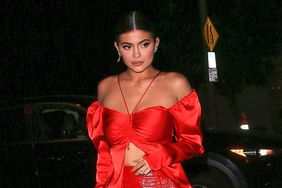 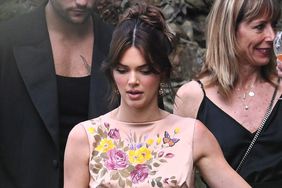