The First Lady went for a luxe high-fashion moment

First Lady Melania Trump opted for a different kind of power suit at President Donald Trump’s first address to a joint session of Congress. And the high-fashion piece came with a high price tag. While the majority of the female Democrats in attendance wore white, Melania chose a black sequin Michael Kors Collection jacket and matching skirt, totaling $9,590 before tax.

FLOTUS teamed the floral-embroidered dinner jacket, which retails for $4,995, with the coordinating glittering skirt, also available on the designer’s website for $4,595, and completed the look with a black belt. Kors is among the American brands she’s worn recently (others include Calvin Klein and Ralph Lauren), though she has also opted for pieces by luxe European brands including Givenchy and Alexander McQueen.

The sequins – and the price – struck some on social media as inappropriate for the setting. She would not be the first politics-adjacent woman to draw criticism for choosing very expensive (and seemingly tone-deaf to average Americans) attire for political events: Hillary Clinton got flak from top Republicans (Sean Spicer included) for wearing a $12,495 Giorgio Armani coat during her New York primary victory speech in April 2016, and Michelle Obama famously stepped out in $540 lavender sneakers while speaking at a food bank in 2009.

But the biggest sartorial statement came from the Democratic women of congress at President Trump’s address, who wore symbolic white suits.

A majority of the 66 female representatives and delegates in the House Democratic Women’s Working Group wore white outfits to show their support and solidarity for women’s rights.

“Tonight, our Democratic #WomenWearWhite in support of women’s rights — in spite of a @POTUS who doesn’t,” House Minority Leader Nancy Pelosi tweeted along with a photo of her female colleagues.

What do you think of Melania’s look? Share below. 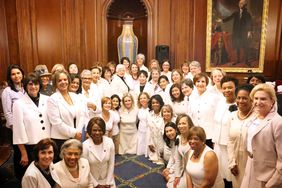 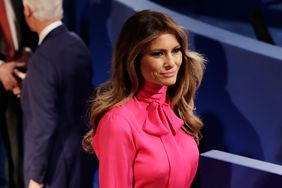 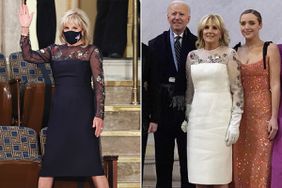