Mark Consuelos and Kelly Ripa are getting into the Halloween spirit.

On Friday, Ripa shared a photo on Instagram, featuring herself and her husband in 1940s-inspired costumes to promote the Halloween episode of Live with Kelly and Ryan.

Ripa wears a dusty blue, pleated dress paired with sheer white gloves and a dark hat. She completed the look with a pair of black and silver heels.

Meanwhile, Consuelos complemented his wife's look with a gray vest and suit pants — which fans were quick to point out were relatively tight for the 1940s.

"Not sure the 40's pants fit quite like that, but who's complaining?" one follower commented.

In return, Ripa quipped in the comments that "it's a Halloween tradition" for Consuelos to wear tight pants with his costume.

The television host, 51, was playfully referring to last year, when her followers made similar remarks about Consuelos' costume.

Ripa posted a series of Halloween-themed photos taken of her family throughout the years, and one of the shots showed the Riverdale star, 50, wearing a form-fitting motorcycle cop uniform beside his friend, Bruce Bozzi, that was meant to resemble the outfits worn by the main characters on the TV show CHiPs.

Fans wrote in the comment section of Ripa's post, where they took notice of Consuelos' private area, as one user joked, "Mark is packing a gun in his cop uniform" while another added, "Your husband stuffed his pants."

Observing the conversation, Consuelos wrote in the comments, "Full disclosure, I believe that's definitely a shadow that's causing that bulging effect," before Ripa chimed in with her own response: "Ummmmm baby are you seeing shadows?"

"Pretty sure," Consuelos replied back.

Ripa and Consuelos met on the set of the soap opera All My Children in 1995 and married the next year. They share three children: sons Michael, 24, and Joaquin, 18, and daughter Lola, 20.

Michael, who co-starred with his father on Riverdale, recently said he views his parents as "relationship goals."

"One hundred percent they're relationship goals, and it's weird because I've been with them the longest," he told Entertainment Tonight, noting his age as the oldest of the couple's three children. "Not a year after they were married, about a year, then I came into the picture. So we kind of grew up together, at least that's how I see it."

Michael added that he admires his parents beyond their love for each other, and looks up to them as role models.

"They're great, not just in like a relationship sense, but they're great role models," he told ET. "I try to conduct myself the way I think they would." 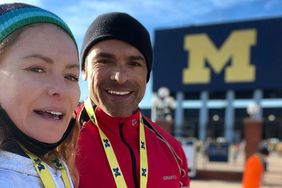