The rumors are true! Margot Robbie got married over the weekend to her longtime boyfriend Tom Ackerley at a private, intimate ceremony in Coorabell, a small town found in Australia's Byron Bay. The newlywed gossip first began last week when Robbie was spotted arriving in her native country wearing a t-shirt that read "Say 'I Do' Down Under." But now a handful of photos of the close friends and family-only nuptials have confirmed what we've all suspected to be true, the pair have officially tied the knot.

On Monday night, Robbie more or less confirmed the news, posting a candid shot of her and her new husband on her Instagram account featuring them kissing with her left hand ring finger front and center and pointed at the camera, showing off a large teardrop shaped stone on a thin platinum diamond-encrusted band with an even thinner wedding band almost completely obscured underneath.

Photos released revealing the rural landscape of the venue in the Byron Bay area where the couple married give a sense of the laid-back tone of their nuptials. (The town's motto is "Cheer Up, Slow Down, Chill Out"!) Livestock covered the fields near the tent and guests overlooked green pastures.

The pair have been dating since 2013 when the actress and the assistant director first met on the set of the World War II drama Suite Francaise, and sparked suspicions of an engagement early this summer.

Considering the Suicide Squad star is a regular amongst the best dressed lists on major red carpets, it should come as no surprise that the gown she chose for her big day was equally elegant and still totally on-trend.

For the 50-person ceremony, Robbie opted to wear a cream-colored design with an off-the-shoulder neckline with a big lace ruffle across the bust, a bone colored ribbon cinched at the waist and a long skirt. She accessorized her look with a simple gold pendant necklace. Her hair was equally nonchalant, pulled back into a loose french braid with a few stray tendrils framing her face, and her makeup was kept equally simple and natural.

What do you think of Margot's wedding details? Sound off below! 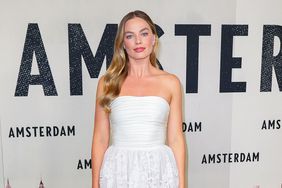 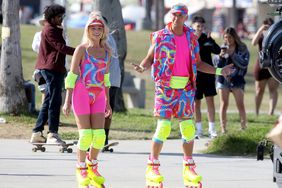 Margot Robbie Says She Was 'Mortified' When 'Hundreds of People' Swarmed 'Barbie' Set in L.A.