The couple got engaged one year ago at a Chipotle restaurant

Marc Jacobs said “I do” in high-style.

The fashion designer, 55, tied the knot to his longtime love, Charly “Char” Defrancesco, in an intimate ceremony in New York City. After they said their “I do’s,” they partied the night away at the glitzy midtown restaurant, Grill Room.

Jacobs and Defrancesco wore matching diamond and onyx penguin pins on their special day, a sweet gift from Prada and Miu Miu design director Fabio Zambernardi. “Penguins have only one partner and mate for life. A great example of faithfulness and fidelity. So grateful to you and love you so much dear Fabio,” Jacobs explained on Instagram.

Following the ceremony, the newlyweds shared a sweet smooch while showing off their flair for fashion. Defrancesco wore a green velvet suit jacket with a matching bow tie as the designer opted for a dark suit.

The couple got engaged one year ago when Jacobs surprised his model-turned-candlemaker beau by popping the question during a dinner date at a Chipotle restaurant on Defrancesco’s birthday.

Before proposing, Jacobs organized a flash mob performance set to Prince’s 1986 hit “Kiss” then got down on one knee.

Nick Jonas and Priyanka Chopra Can’t Stop Saying ‘I Do,’ Plus More Celeb Couples Who Got Hitched More Than Once

“GET READY FOR THE ALL TIME GAG!!!!!” Defrancesco wrote on Instagram after the special moment. “Thank you to everyone who helped make this happen.”

In October 2018, Defrancesco opened up to PEOPLE about why the restaurant holds a special place in his heart.

“I took [Jacobs] to Chipotle for the very first time, and every year for my birthday, we go to Chipotle,” he revealed. “Moving to New York, being from L.A., I’ve always loved Mexican food, it’s my favorite and it’s kind like a little piece of home even though it’s not authentic Mexican food,” he shared, adding, “It’s consistent and tastes like Chipotle, no matter what Chipotle you go to.”

While their wedding was all glitz and glamour, Defrancesco would have equally enjoyed a ceremony at the fast-casual eatery. “I know Marc really, really wants it at the Rainbow Room or the Boom Boom Room but I’d be happy getting married at Chipotle.”

From the looks of Jacobs’ Instagram, they elevated their menu for their big night. In March Jacobs shared a video tasting desserts from pastry chef Ron Ben-Israel alongside Defrancesco.

Jacobs previously told PEOPLE that he didn’t want his wedding to be drama-filled. “We don’t want it to become bridezilla or anything like that but we do want to make it festive and a night we can all be with the people we love.” 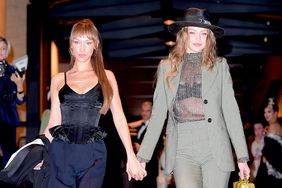 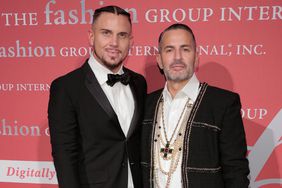 Marc Jacobs' Fiancé Wants a Fast-Food Wedding: 'I'd Be Happy Getting Married at Chipotle'