From the exclusive parties to the stylish front row, see which Hollywood A-listers lived it up during London Fashion Week

By Hana Choi
Trending Videos
01 of 17

After attending an emotional memorial Monday for her late friend, Alexander McQueen, returns to the scene for the Burberry Prorsum show, mixing up a caramel military leather jacket with a chocolate lace skirt and strappy sandals.

It’s a sister act! The design duo are casual in tees during the debut of their Twenty8Twelve collection, a show whose front-row was packed with supporters like pal and fellow designer Matthew Williamson and ‘s on-again beau, .

After turned up front row for his show, the designer returns the favor by sitting with her at her Twenty8Twelve show, showing their support in dandy outfits.

The designer is known for keeping it light and flirty on the red carpet – and he sent down more of the same on the catwalk! Next spring, his fashionable fans look forward to more sweet, billowy dresses and beaded mini-dresses in colorful prints.

Leave it to to prove that all-black need not be boring, as she hosts a party in honor of her Longchamp collaboration.

Having previously modeled for the British designer, the buxom takes it easy this season in her front-row seat at the Vivienne Westwood show, flaunting her assets in a form-fitting multi-colored dress.

Who says there is no longevity in a modeling career? The supermodel celebrates 25 years on the catwalk with a party in her honor at the Dolce & Gabbana store.

Celebrating Campbell was none other than her supermodel pal Schiffer, who even donned one of the charitable T-shirts being sold emblazoned with Naomi’s barely-clad image.

We can’t get enough of It girl – and Madewell collaborator! – Alexa Chung, who gives her epaulet-accented military dress a girly twist with a tidy belt, studded purse and ankle booties before catching the Burberry Prorsum show.

In one of the most hotly anticipated shows in town, Burberry Chief Creative Officer Christopher Bailey did not disappoint! The rocker chic look continues to get updated and modified with studded jackets, leather accented mini-dresses and infusions of unexpected color. And yes, there were plenty of drool-worthy trench coats.

Sometimes you just let the accessories do the talking! The model pumps up her all-black ensemble with a huge faux fur shawl, leopard booties and statement cuffs while leaving an event at posh department store Selfridges.

The Australian beauty and host of Britain’s Next Top Model struts into the Julien MacDonald show in a biker black look, accented by a metallic belt and dark shades.

The British designer breathed life – and a dash of ’70s style! – into his House of Holland collection, showing off bold colors, pleated skirts and halter dresses.

Links of London’s new face sashays into the Julien MacDonald show with a fringe bag and crisp white blazer topping off a black top, skinny leather pants and biker heels.

The mom-to-be helps Westfield Shopping Centre launch its “car boot” sale – a British version of a sample sale! – covered up in a fur-trimmed cream coat and black pumps.

No neutrals here! Scottish designer Kane rethinks classic pieces in high-octane shades and a mix of textures and prints. 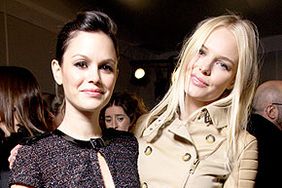 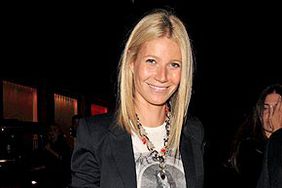