We can't stop talking about Mindy Kaling's bejeweled shift, Jennifer Connelly's all-black ensemble and more outfits stars were just spotted in. Check them out, then vote – fashion-forward or fashion fail?

We have a feeling Mindy’s TV alter ego, Dr. Mindy Lahiri, would want to get her hands on this curve-hugging, jewel-encrusted navy number, worn to AOL’s Build Speaker Series event in NYC. And we bet she’d especially approve of the fact that Mindy doubled-up on the bling via the heels of her blush sandals.

There must be something about Jennifers and all-black ensembles. This Jennifer loves the dark hue, too, but who can blame her when she looks as good as she does in this sparkly knit top and textured skater skirt at the Forger press conference in Toronto.

Appropriately enough for the Paris premiere of a movie set in the 1920s, gives off a flapper vibe in her lace-trimmed Chloé dress, ankle-strap Christian Louboutins and Marcelled bob.

We’ll give her points for consistency! wore her first favorite color for Calvin Klein’s runway show in the morning, and wore her second favorite color later on while attending Fitzgerald and BGC’s Annual Charity Day in NYC.

If it weren’t her supernaturally amazing hair and skin, you might think the supermodel was dressed for work on the trading floor – but she’s just on Wall Street for the day, taking part in Cantor Fitzgerald and BGC’s Annual Charity Day.

At the LACMA screening of her film The Skeleton Twins in L.A., the actress appears to be straddling the seasons, wearing a summery white checked blouse with an autumnal midi skirt (and then adding perpetually timeless black pumps).

Well, she is technically working! The model puts her unmistakable spin on menswear with a business suit-inspired tie-and-trouser combo a charity phone-a-thon for Cantor Fitzgerald and BGC’s Annual Charity Day in NYC.

The Victoria’s Secret Angel walked Desigual’s runway just days before appearing at an event for the brand in Madrid, clad in one of their signature multi-patterned minis that takes the sheer skirt trend to a whole new level.

The True Blood actress sports a jewel-toned spaghetti-strap shift that goes from basic to bold (thanks to that geometric neckline) for a screening of Fort Bliss in L.A

The actress’s signature pixie (as seen in her recent Rag & Bone campaign) is no more! A long-haired Winona goes for oversized everything, plus platform boots, for the opening of This is Our Youth on Broadway in NYC.

We’d be thrilled to look like this on a special date night. Karolina wears it to the trading floor. The model amps up an already-awesome leather mini with cobalt heels for the Annual Charity Day hosted by Cantor Fitzgerald and BGC in NYC.

We can’t tell exactly what the pattern is on Orange is the New Black star’s little white Honor dress at the Annual Charity Day event in NYC, but we can say for certain that we love the flattering cut and her killer hairdo.

For Cantor Fitzgerald’s Annual Charity Day in New York City, the newlywed picks a scarlet frock with a double-breasted and buttoned-up effect.

Attending an event for her Honest Company in N.Y.C., picks a pink Roland Mouret dress with subtle neckline pleats, then gives the pretty piece a little edge with metallic pumps.

doesn’t often go so low, but she breaks her style rules for Prada’s sweet coral number with black piping at the Disappearance of Eleanor Rigby screening in N.Y.C.

At an America’s Got Talent event in N.Y.C, forgoes her typical bolder, golder minis in favor of an embellishment-free LBD and simple pumps. We know, we’re still reeling from this information too.

Are you loving oversized fuzzy poncho, flowy dress and glittery rainbow sandals at the Chovgan Twilight Polo Gala in London – or do you want to fur-get all about it?

What does one wear to fête the book in which you appear totally nude? For Kendall, it’s an off-the-shoulder top and studded skirt, worn to Russell James’s Angels book launch hosted by Victoria’s Secret in N.Y.C.

We’re pretty sure the designer of this polka-dotted, pop-art-floral A-line dress put a big sticker on it that said “For Zooey Deschanel.” It paid off: The actress wore it to the Skeleton Twins red carpet in L.A.

All those years of dancing has truly paid off for : The 52-year-old sizzles in in this sassy halter mini, worn to the 2014 Industry Dance Awards, where she was honored. And in that skirt, we’re guessing they couldn’t keep her away from the dance floor for too long.

At Fashion Rocks in Brooklyn, provides the mic-drop moment of the night, putting her toned body on full display in a gold-plated, cutout Atelier Versace number that’s part gown, part romper, and a whole lotta sexy (and clearly she has an affinity for the half-gown look, rocking similar styles here and here). As for accessories, she goes for giant hoops, a gold plexiglass Thalé Blanc clutch and black pumps.

With lingerie this sexy, who cover it up? That must have been thought when she suited up for Fashion Rocks in Brooklyn in a black leather lapel blazer, pants and pumps, but skipped a formal top in favor of flaunting her metallic bra, which matches her envelope clutch.

The model gets a little exotic at Fashion Rocks, picking an animal print bustier and high-waisted pants by Sally LaPointe and adding gold Jennifer Fisher upper arm bangles, plus an on-trend body chain.

She’s already won the US Open, but the tennis champ keeps the sporty style in play at Fashion Rocks in Brooklyn, displaying her bod in a leather crop top and matching flared skirt, punctuated with mesh open-toe booties at Fashion Rocks.

The “rapper-actress-Anaconda-aficionado” stuns in a Saint Laurent tuxedo-style mini that vibes sexy, but in a refreshingly understated way. She skips the usual jewelry altogether, opting to bling out on her feet with gold-embellished, open-toe Giuseppe Zanotti booties at Fashion Rocks.

No, this isn’t an optical illusion. The bodice of Rita’s Stéphane Rolland gown at Fashion Rocks is secured by a major sheer panel. As for the bottom half of the eclectic piece? It’s what we’re calling ballerina glam: her flippy hem reveals layers of ivory tulle, while embroidered black chiffon flows to her strappy heels (she accents the architectural number with a highly engineered topknot). The singer switches up her style as much as she changes up her hair, so we’re not surprised by this quirky pick.

takes a walk on the wild side, accessorizing her LBD complete with sheer panels at the neckline and hem (which really shows off her post-baby body) with animal-print pumps at the Michigan Avenue Magazine launch in Chicago.

That was quick! For InStyle’s 20th anniversary party in NYC, the actress manages to snag one of the dresses from Prabal Gurung’s Spring/Summer 2015 line, meaning that it was shown on the runway just three days ago.

The New Girl star sports a white mini with a thick black waistband and mod buttons for the FOX Fall Eco-Casino party in Santa Monica, Calif .

Also at the FOX Fall Eco-Casino party in Santa Monica, Calif., Emily chooses a completely different black-and-white look from little sis Zooey, with a futuristic pattern and a subtle avian motif. And we thought Zooey was the sister most likely to “put a bird on it!”

Take this outfit as your cue to start an “Amazing New Year’s Eve Outfits” Pinterest board, stat! The Victoria’s Secret Angel steps out in a celebration-worthy glittery Houghton jumpsuit and metallic accessories for InStyle’s 20th anniversary party in NYC.

We can’t remember the last time we saw the Once Upon a Time star without a braid! Jennifer lets her hair down at the NYC InStyle bash in a striped midi dress and cut-out heels.

Sure, you’re mesmerized by ‘s bold new cut and color, but it’s also hard to ignore the bombshell’s latest take on the bodycon silhouette: a zippered pencil skirt and high-necked tank (worn with Jimmy Choos).

The Orange is the New Black star picks a fitted mini-checked Marc Bouwer with a mini-peplum for the InStyle 20th anniversary party in NYC.

We can’t help but think that the 16-year-old actress is channeling The Little Mermaid in a seemingly scuba-inspired crop top and matching skirt (plus possibly “dinglehopper”-combed hair?) at InStyle’s NYC party.

The most visible star of NYFW doesn’t miss a beat, attending the InStyle bash in yet another pretty party dress – this one burgundy and accented with daring sheer panels.

Who needs a necklace when you’ve got the neckline that ‘s rocking for the NYC InStyle anniversary party? Her similarly-studded platform sandals help tie the look together.

Just when you think that every variation on the cutout trend’s been done, in walks Padma to the InStyle party in NYC, wearing her elasticized white one-shoudler gown with a silver-accented belt around her exposed midsection.

Where was this superhero-chic look during ComicCon? The actress opts for a bold Cushie et Ochs dress and corresponding white sandals for a screening of Teenage Mutant Ninja Turtles in Sydney.

For a charity Celebrity Fight Night in Florence, Italy, Amal chooses a long strapless Dolce & Gabbana dress and adds pops of gold via dangling earrings and a gilded clutch, plus her best .

Not that it’s a shock, but the model looks just as amazing covered up in a glam gown as she does in her standard issue swimsuit. For the Celebrity Fight Night event in Florence, Italy, she goes for a black-and-pink Roksanda maxi with a blousy top.

Cushnie et Ochs, the designer wearing, definitely comes up with some creative ways to show cleavage. The actress’s dress is no exception and she accessorizes it with Pollini heels and a Reece clutch for the Hollywood premiere of Sons of Anarchy.

We’ve seen white suits and black suits on the red carpet, but Sharon adds a twist to the classic with a three-piece number, seen at the Project Angel Food Angel Awards in Los Angeles. 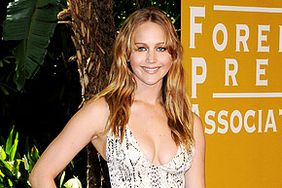 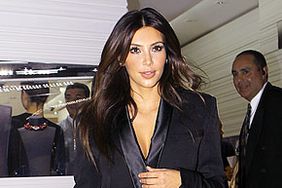 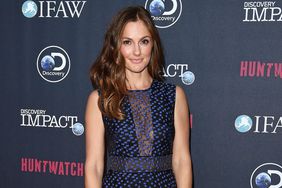 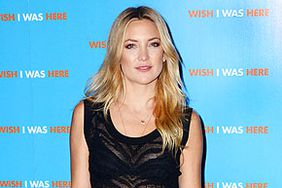 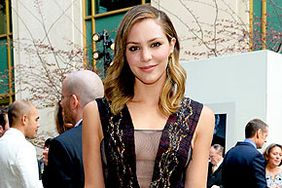 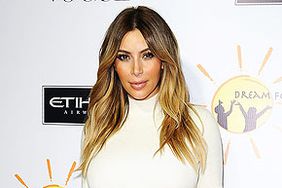 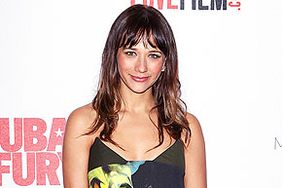 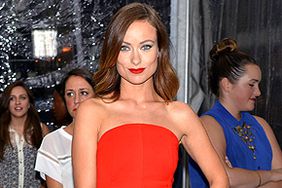 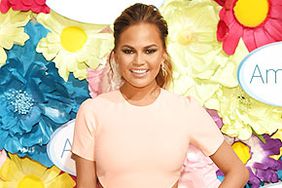