Two celebrity fashion projects you need to know about now

Summer isn’t even over, but in magazine-land we already have holidays on the brain. And while we’re not quite ready to unveil our holiday gift guide, there is one thing we think you should know about early: Lady Gaga and Tony Bennett will be fronting H&M’s holiday campaign.

The wacky pop star and veteran singer will star in a commercial airing in November, which will feature a track from their upcoming album “Cheek to Cheek.” In the spot, Gaga will be wearing H&M (obviously), but she also dons a wig that trumps any hairpiece she’s worn in the past (and would trump any in Cher’s tour closet, too): a voluminous curly style which she styles with a big silk bow in the preview clip below.

More impressed by Bennett’s style? A suit similar to the one he wears in the ad will also be sold at select H&M stores, according to WWD.

In other star style collaboration news, Miley Cyrus is teaming up with Moschino designer Jeremy Scott on something that’s bound to include bold, loud fashion, but we’re not sure exactly what it is just yet. (His latest collections have featured McDonald’s-themed gear and SpongeBob SquarePants dresses, so you can imagine where he might go with Cyrus.)

“Miley and I have something very exciting that we are brewing for the future,” the designer told MTV at the VMAs. “I am going to let her announce it.”

Are you excited to see the H&M spot? What do you think of the Cyrus and Scott’s pending parternship? Share your thoughts below.
–Brittany Talarico 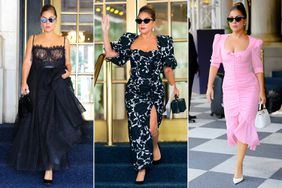 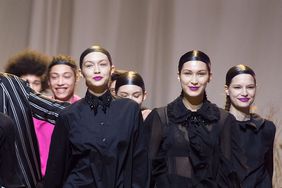