The mother-of-two accessorized her look with a simple gold clutch and a pair of lace-up brown suede boots.

She and her husband were spotted leaving their hotel as they made their way to the American Airlines Arena. West wore a crisp white shirt with a colorful print portrait in the center — paired with white jeans.

They were with a handful of friends — including Larsa Pippen, Jonathan Cheban and Kourtney's ex Scott Disick.

Afterward, the crew headed backstage to celebrate with West — walking the arena's backstage hallways like a runway.

A source tells PEOPLE that Kardashian West "seemed really happy" and "was having fun" during the concert. The source added that Khloé's new beau Tristan Thompson was at the afterparty and the pair were spotted making out.

The Kardashian sisters have been hanging in Miami this week — celebrating friend Stephanie Sheppard's birthday and stopping by the Miami location of their store, Dash.

The queen of nude selfies even bared all in a racy Snapchat Thursday night from her Miami hotel room.

"Nothing like a midnight spray tan, you guys. Tanorexic," Kardashian West said in the clip. 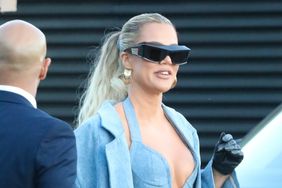