Kim Kardashian West received some backlash when she shared that having the flu was “an amazing diet,” but that’s not stopping the star from showing off her slim-down. While Kim obviously works extremely hard to maintain her physique with endless training sessions and a rigorous adherence to her diet, she tweeted on Tuesday that falling ill helped her to lose an additional six pounds just in time for the biggest annual event in the fashion industry, the Met Gala. So, of course, when you finally achieve your goal weight and beyond, the natural human response is to want to put it all on display. Which is precisely what the reality star did, deciding to step out in nothing more than a sports bra and second-skin leggings.

On Tuesday night, Kim debuted her post-cold body, taking a break from her standard style uniform from the past few months, consisting predominately of an assortment of fur coats, partially unbutton henleys, giant sweatpants and the same pair of Yeezy booties, in favor of something a little more befitting the sweltering Calabasas, California, temperatures and her new summer bod. While she did initially leave her car wearing a tan, floor-grazing duster casually slumped off her shoulders as is the latest celeb style, she quickly abandoned it in favor of giving her slimmed-down body the paparazzi moment it truly deserves.

To highlight her six-pounds-thinner frame, the Kimoji CEO wore a beige scoop-neck bra from her husband’s fashion line along with a long gold pendant necklace also from his forthcoming jewelry collection with Jacob the Jeweler. She paired the barely-there crop top with a pair of taupe latex-looking leggings that give the illusion of being almost sheer with two yellow racing stripes down the outside of her legs, and finished off with her same favorite pair of lace-up Yeezy boots. Perhaps Kim is using this ordinary Tuesday ensemble as a harbinger of all the Beyoncé-inspired latex attire she has in store for us at the Met Gala next month. Let’s just hope she packed a couple extra bottles of baby powder. 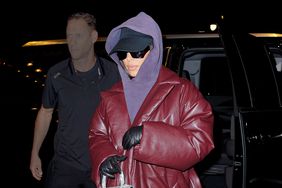