Kim Kardashian West has reevaluated the jewelry she wears since her Paris robbery last October, but the KKW Beauty mogul just invested in simple, timeless piece once owned by first lady Jackie Kennedy.

The first lady’s gold Cartier watch with a black band was auctioned off at Christie’s in N.Y.C. on Wednesday, and was expected to be purchased for $120,000. However, the beautiful timepiece ended up going for a pricey $395,000, and according to TMZ, the anonymous bidder was Kardashian.

The understated, classic piece doesn’t feature any diamonds and fits in with the less flashy lifestyle the 36-year-old has been living since her harrowing experience in Paris

“It’s not to say that I’ll never wear jewelry again or anything like that. I truly don’t know if I’d ever feel comfortable. My whole life has changed in terms of how I travel and what security,” Kardashian said in an interview on Ellen.

Kennedy was originally gifted the watch by her brother-in-law Prince Stanislaw Radziwill on February 23, 1963 to commemorate a 50-mile hike he took part in on behalf of President John F. Kennedy, months before his assassination.

Do you love the watch Kim got? Sound off in the comments below. 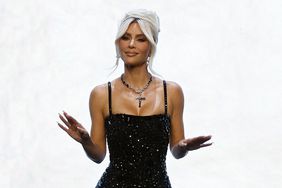