Kendall Jenner‘s been serving up some serious travel style inspiration as she recharges with friends during a Mykonos getaway.

While the supermodel takes a break from the runway to enjoy some much-needed T.L.C. on vacation, Jenner, 23, hasn’t stopped giving fans an inside look at her very on-trend summer style on social media. And spoiler alert: much of her time has been spent lounging on a luxurious yacht in a bikini with her closest friends.

The star put her modeling skills to the test as she flaunted her hourglass figure wearing a vibrant yellow bikini and slim rectangular sunglasses. Jenner simply captioned the gorgeous shot with a smiley face emoji.

After striking a pose, Jenner took a dip in the stunning sea and stopped for a photo with her friends with the gorgeous backdrop of the Greek isles in the background.

Another day, Jenner soaked up the sun in a shimmering silver two piece which she documented with the sparkle-enhancing Kira Kira photo app.

She also continued to experiment with one of summer’s hottest trends — neon! — the next day she spent at the beach. Jenner lounged on her side and flaunted the sport neon green knit bikini which perfectly paired with her more subdued, pastel mint manicure.

Before the end of her vacay, Jenner made sure to participate in some traditional Greek customs, which she really seemed to embrace. Her favorite: plate smashing (it’s an ancient tradition in Greece to do during celebratory occasions). “I enjoy it too much,” the model wrote on her Instagram Story.

While we aren’t quite sure what Jenner and her friends were celebrating, we do know she dressed in her best for the occasion. The model gave a glimpse on Instagram at the back side of her bodycon micro mini dress. And you can add the shimmering bronze Meshki mini to your summer suitcase for just $57.

Though Jenner’s gotten decked out in her best designer dresses and bikinis during the trip, she’s also fond of low-key, cozy outfits too.

After capturing a majestic video of three dolphins swimming in the ocean ahead of her yacht, Jenner posted a sweet photo chilling by the beach wearing an oversize sweatshirt as she wrapped her arm around BFF Gigi Hadid‘s shoulders. 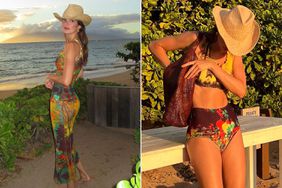