Katy Perry Puts a Famous Face on Her Warm-up Tee

We love Katy Perry for her over-the-top onstage fashion choices, so it’s no surprise we feel the same about her rehearsal gear, too — especially her Kanye West T-shirt.

MTV Style spotted the pop star sporting the tee in a teaser (below) for her new concert film Katy Perry: Part of Me 3D. The cheeky graphic tee shows West (who guested on Perry’s “E.T.”) as an Egyptian pharaoh — a caricature we’re sure the rapper-turned-fashion-designer would approve of.

The company behind the silkscreened creation is New York City-based Deer Dana. Other celebs that have been artistically interpreted for the sake of fashion include Justin Bieber as a Greek god, a busty — yet realistic — Kim Kardashian (West’s current girlfriend), everyone’s favorite royal redhead Prince Harry and more.

It’s nice to know that even Perry’s most low-key outfits are just as entertaining as the rest of her looks. Check out more of the singer’s style choices when her first film hits theaters July 5.[brightcoveplayer 1653291145001] 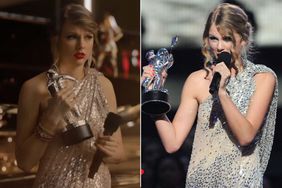