Orlando Bloom is the Lord of the (Engagement) Rings! The actor popped the question to singer Katy Perry, 34 with a seriously surprising flower-shaped sparkler and we’re taking a closer look at the unique design.

Bloom, 42, and Perry, 34, announced their engagement on Valentine’s Day by showing off Perry’s new bling in a joint announcement post on Instagram. “Full bloom,” Perry captioned a selfie with her new fiancé.

While Perry and Bloom haven’t shared any details about the ring just yet, jewelry expert and gemologist Grant Mobley studied the star’s unique piece to give us a bit more insight on the one-of-a-kind design.

“The ring is a classic floral halo design in yellow gold,” Mobley tells PEOPLE. “The center stone appears to be an oval-shaped ruby accented by natural white diamonds surrounding it to create a floral halo.”

He estimates that the ruby is about 2 carats and the diamond halo is 2.5 carats, making the entire engagement ring more than 4.5 carats altogether. E! reports the ring would retail for approximately $5 million.

Mobley calls the design a nod to the early 20th century’s Edwardian period. He adds, “It is also worth noting that the design is similar to Kate Middleton’s engagement ring passed on from the late Princess Diana. While the center stone and the color of the gold is different, the style is quite similar.”

He also isn’t surprised to see Perry and Bloom get a non-traditional engagement ring. “It fits their personality. There’s a growing trend in couples wanting to step out of the box and buy a one-of-a-kind engagement ring,” Mobley says. “My guess is that Katy has a special connection to the color red which is why Orlando choose a ruby.”

The couple first sparked romance rumors in January 2016, when they were spotted acting flirty at a Golden Globes afterparty. PEOPLE then confirmed the “Firework” singer and Lord of the Rings alum were dating, and by February they had introduced one another to friends, as well as Bloom’s 8-year-old son Flynn with ex-wife Miranda Kerr.

But Perry and Bloom’s first shot at romance lasted about a year, before they announced their split in February 2017, when their reps told PEOPLE: “We can confirm that Orlando and Katy are taking respectful, loving space at this time.”

However, they remained friends, and by August 2017, Perry and Bloom were spotted together at an Ed Sheeran concert in L.A. One year after the pair parted ways, in January 2018, whispers of a reconciliation began rippling when they celebrated the New Year vacationing in the Maldives.

“In the past few months, they have spent a lot of time together. They both love traveling and are trying to share as many fun trips as possible,” an insider told PEOPLE in March 2018. “They are dating, but not necessarily putting a label on it. They are not girlfriend and boyfriend. They do seem very happy together though. Orlando always had the nicest things to say about Katy. He loves spending time with her.”

By May 2018, Perry finally confirmed she and Bloom had rekindled their romance on the American Idol finale, when she said: “I’m not single.” 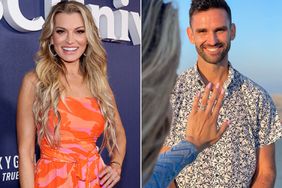