Katie Holmes Designs a Palette With Bobbi Brown: 'It's All About the Effortless Chic'

The star has a new project

Katie Holmes‘s résumé just keeps getting longer. From TV star to Broadway actress, mom to model to haircare guru, there isn’t much she hasn’t tried.

And now she can add “makeup maven” to that ever-expanding list. For fall, the actress expanded her role as the face of Bobbi Brown cosmetics to become a collaborator on a compact and a brush set, called The Bobbi & Katie Collection.

Comprised of eight eyeshadows, two Pot Rouges and a mini eye pencil (the latter of which Brown credited to Holmes and called “genius”), the palette is inspired by an old journal of Holmes’s and by her conversations with Brown. “These are things that will perk you up. And I look to Bobbi for that, because she’s an incredible makeup artist,” she said. “I’m always asking her, ‘What do I do when I’ve slept four hours and I’m going to a meeting? What do I do so I don’t look like I’m exhausted?’”

She might need even more of those tips in the upcoming months. She’s got another Holmes & Yang show coming up at New York Fashion Week and is filming two movies at the moment — not to mention toying with the idea of launching a fragrance. “I’m interested [in perfume],” Holmes said. “We all need a little help in smelling good, especially in the summer in New York City!”

Tell us: Are you excited to check out Holmes’s first foray into makeup? Would you try her perfume?

Katie Holmes Is the New Face of Bobbi Brown Cosmetics 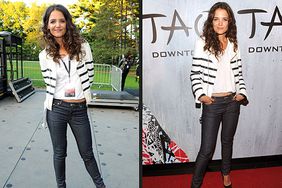 See Katie Holmes All Glammed Up in This Exclusive Photo 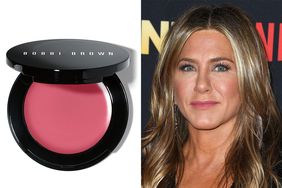