Kathy Griffin’s latest major hair change has a powerful meaning behind it.

The actress and comedian, who’s been under fire the past few months after posing for a very controversial magazine cover, shaved her head to stand in solidarity with her sister who is currently undergoing chemotherapy while battling cancer.

A series of photos popped up on social media showing the star not long after her big buzz cut. In one photo, Griffin posed alone and topless in front of bushes outdoors, smiling with pride and holding her right hand on her bare head.

In the second photo, Griffin sits beside her mom Maggie Griffin, who covers her mouth in surprise after seeing special gesture the actress did in honor of her other daughter Joyce Griffin. Maggie later Tweeted that her daughter Kathy was a “wonderful human being.”

Although it is not clear what type of cancer Griffin’s sister is suffering from, it’s obvious diagnosis hits home for the star. In 2014, her older brother Gary Griffin passed away at 63-years-old after a more than two-year battle with stage-four esophageal cancer.

“This AM my brave brother Gary Griffin passed away in palliative care after a brutal struggle w cancer,” Griffin wrote on Instagram after his passing. “Oh & he was funny as s––t.”

What do you think about Kathy’s bold hair change? Share your thoughts below. 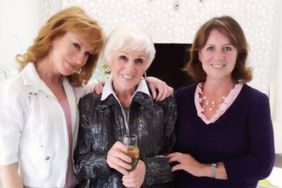 Kathy Griffin Tearfully Responds to Mean Comments About Her Curly Hair: 'This Is How It Grows Out of My Head!'