Following his death at the age of 85, here's a look back at the industry titan's 65-year career in fashion

Lagerfeld got his start in the fashion industry after winning the coats category in a Paris design competition sponsored by the International Wool Secretariat in December 1954. He was only 21. This launched his career, and shortly after he was hired as assistant to French designer Pierre Balmain, where he worked for three-and-a-half years before he was asked to become art director at the house of French couturier, Jean Patou.

Lagerfeld remained at Patou's fashion house for five years. "I was tired of being an assistant; I wasn't born to be an assistant," Lagerfeld said at the time of moving from Balmain to Patou. "If you are an assistant endlessly there is no hope."

Lagerfeld seen here working for Chloé, where he started designing in 1964.

Lagerfeld was held in high regard at many high-fashion houses. While he remained at Chloé through the '70s, he is seen here consulting backstage at the Givenchy spring 1979 ready-to-wear show in Paris.

In 1983, Lagerfeld took over as design director of Chanel, where he introduced the iconic double CC's on everything from biker jackets to boots to jewelry. Here Lagerfeld is seen with models including Jerry Hall (sitting down) on July 23, 1984, at the end of Chanel's autumn-winter 1984/1985 Haute Couture show in Paris.

Lagerfeld hits the runway with his '90s-Chanel muse, Ines de la Fressange, at the fall/winter 1987 ready-to-wear collection show in Paris.

Lagerfeld quickly became known as the Kaiser of the fashion industry, see here with Vogue editor and close friend Anna Wintour at the Seventh On Sale AIDS Benefit in N.Y.C.

Lagerfeld, seen holding his trademark fan, closes the fall/winter 1990-91 Chanel show in Paris alongside one of his many '90s supermodel muses, Linda Evangelista, who was dressed in bridal couture. Lagerfeld was known for closing his shows with a wedding look.

Lagerfeld prepping one of his many muses, model Claudia Schiffer, for the runway by wrapping her with Chanel's trademark chains during the Spring show.

While still holding the reins at Cholé and Chanel, Lagerfeld also held court at Italian label Fendi, where he worked with Silvia Fendi from as early as 1965. Here Lagerfeld is surrounded by the five Fendi sisters (from left to right: Carla and Alda, in the second row Franca, Anna and Paola), heads of the luxury fashion house.

Model Linda Evangelista taking on the role of bride once again alongside Lagerfeld at Chanel's fall/winter 2003-2004 show in Paris.

Lagerfeld leads the Chanel runway crew during the spring/summer 2005 show in downtown Tokyo, which celebrated the launch of Chanel opening its biggest boutique in the world on the main street of the Ginza shopping district.

Lagerfeld accepting his fashion award for creativity at the 57th annual Bambi Awards in Munich, Germany.

When he wasn't busy designing, Lagerfeld also pursued photography, often shooting his own modeling campaigns for his eponymous label, Karl Lagerfeld. Here the designer poses by his photos during the opening of the "One Man Show" photography collection in Berlin. The exhibition featured portraits of American model Brad Kroenig from the past five years, all shot by Lagerfeld.

The designer takes the catwalk solo at the end of his autumn/winter 2009 ready-to-wear collection show in Paris.

Diane Kruger and Lagerfeld attend the 2012 amfAR Cinema Against AIDS gala during the 65th Annual Cannes Film Festival in France.

Lagerfeld joins his models at the end of the Chanel Haute Couture fall-winter 2013/2014 show in Paris.

Lagerfeld is joined by his godson Hudson Kroenig and model Cara Delevingne, dressed as a bride, during the Chanel Haute Couture spring-summer 2014 collection show in Paris.

Lagerfeld was known for transforming his shows with over-the top themes. Here the designer is seen at Chanel's supermarket, created for the label's fall/winter 2014-2015 Paris Fashion Week show.

Later that year, Lagerfeld, alongside model Gisele Bündchen, led a protest on the runway during the spring/summer 2015 show in Paris.

Lagerfeld seen standing next to a drawing of his beloved Birman cat Choupette at a photo call for his calendar, 'Corsa Karl and Choupette' in Berlin. For the calendar, Lagerfeld took photos of his feline, whom he has called "the most famous cat in the world."

Lagerfeld walks the runway during the Chanel Metiers d'Art 2015/16 Fashion Show in Rome.

Model Lily-Rose Depp and Lagerfeld take a final walk in front of Lily-Rose's mother Vanessa Paradis, at the end of the Chanel spring/summer 2017 show in Paris.

Lagerfeld walks the runway in Paris during the Chanel show, which was transformed into an island beach, as part of the Paris Fashion Week spring/summer 2019 show in October.

Marking his final fashion show walk, Lagerfeld takes the Chanel runway for a final bow at the Metiers D'Art 2018/19 Show at The Metropolitan Museum of Art in December in New York City. 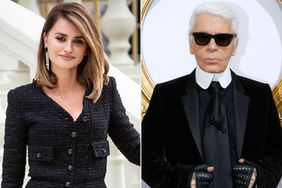