The Japanese fabric company accused the rapper of withholding their share of over $600,000

Kanye West and his company, which creates his famed Yeezy sneakers, are being sued for allegedly withholding more than $600,000 from a Japanese company who was providing fabrics for his line.

Toki Sen-I Co. filed the lawsuit against West and Yeezy Apparel, LLC. on Thursday, claiming that the 41-year-old rapper attempted to cheat them out of money by creating a fake company, according to court documents obtained by The Blast.

The Japanese knitted fabric supplier, who said it began working with West in 2015, explained that problems arose when it requested a down payment for a large order of various fleece fabrics in June 2018, which West never provided.

According to the company, the “I Like It” rapper later announced he would not be paying for the fabrics at all, which totaled $624,051, and refused to compromise over the many payment plans that were offered by Toki Sen-I.

The company also claim Yeezy Apparel is a “sham,” operating without capital assets or member interest, and believe West runs the clothing and shoe company in a compromising manner to benefit himself.

Representatives for West did not immediately respond to PEOPLE’s request for comment.

This is not the first time that the rapper-turned-designer had legal troubles with his brand.

In March, West fought for the right to secure ownership over his moniker. According to legal documents obtained by PEOPLE, the Chinese apparel company Fujian Baby Network Technology Co., filed paperwork to trademark “Yeezy Boost” in 2017 for use on its own clothing products.

West started using the term Yeezy on his shoes in 2013 and obtained the trademark in 2017, but the designer didn’t follow through on securing the trademark for the clothing line.

And days earlier, Jordan Outdoor Enterprises filed a lawsuit against West’s label and claimed that Yeezy’s camo print was an unauthorized copy of their Realtree collection.

The alleged copycat pattern was used as a part of West’s Season 5 line for hoodies, bomber jackets, shirts, cargo pants and thigh-high boots. 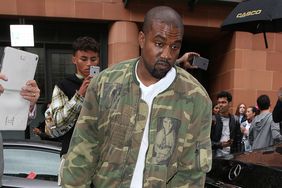