From her trifecta of hair changes to her flawless makeup, the newlywed's hairstylist and makeup artist spill the secrets behind her wedding day beauty looks.

Last weekend, Julianne Hough and Brooks Laich tied the knot during an intimate ceremony on Lake Coeur d’Alene, Idaho. And while we were left dazzled by her two custom Marchesa gowns, we’re still not over her flawless makeup and the three (yes, three!) hair changes that she made throughout the night. So to get the scoop, we spoke to the star’s hairstylist and best friend, Riawna Capri, and her makeup guru, greatbeauty.com celebrity makeup artist Spencer Barnes, who shared all of the behind-the-scenes details exclusively with People.

“Jules has done so many amazing things with really strong looks on Dancing with the Stars, country music tours, dance tours, as movie characters, and at red carpet events, so she thought, ‘I just want to be super fresh, radiant, clean and minimal. I just want to feel and look beautiful and timeless,’" Barnes says. “Brooks also prefers her with little or no makeup, so he was delighted of course as well to see her just glowing and not so made up.”

For her hair, Capri says, “Her dress was very simple, so for her hair we wanted to do the same. She had this vision from the get-go of a high ballerina bun. She knew she wanted a center part, which put a little twist on the classic bun. In order to get it to be so perfect we actually did three ponytails. The first was to make sure the center part was perfect. Second was to perfect the sides, and third, we grabbed everything underneath, and then twisted all three together into the bun. That’s the best way to get a perfect pony. We also did a big color change before the wedding-- we really went platinum. My first appointment with her was 6-7 hours and the last appointment was 3 hours.”

“Jules decided to do her glam first before her bridesmaids,” explains Capri. “It was just me, her, Spencer [Barnes], Anita [Patrickson], Julianne's assistant Kristy, some of her bridal party, and then her and Brooks, whose hair I did too. It was so relaxing and so peaceful and quiet, which ended up being perfect because she was stress free and ready while all the girls were getting ready. She even did the flower girls' hair -- she braided it.”

But before styling her flower girls’ (and her dog’s) hair, Julianne also helped with her own.

“She’s very hands on with her hair and her makeup so it’s nice to work with her,” says Capri. “So we get in front of the mirror together and she’ll kind of grab the first section and I’ll take it and wrap it. Even on her wedding day. She knows exactly what she wants.”

Julianne’s best friend, Nina Dobrev, walked down the aisle with the star as well. Hairstylists Jill Buck and Nikki Lee, along with and makeup artists Denise Madrigal, all from Nine Zero One Salon, and Lacy Moen handled her glam, as well as the rest of Hough’s bridal party.

“Let me tell you, she wanted the veil on," says Capri. "Most brides, I’m like, ‘No let’s wait 'til you get in position for your first photo to put the veil on because it’s long and it’s heavy. Nope. She wanted to walk out the door with it on. That thing was dragging on the floor. She wore the veil the entire day. She was not irritated by it at all -- it was a part of the hairstyle in my opinion.”

“Julianne’s original idea -- this is not a joke -- she really wanted to cut her hair short,” laughs Capri. “We went back and forth for about a month about whether or not we’re gonna cut her hair right before the wedding. We really wanted it to do it after ceremony, before the reception. Which is doable, totally fine. I’ve done haircuts under pressure. Totally down. She finally comes in for her 6-hour color appointment and we make her hair so beautiful, she’s like, ‘I don’t want to cut this.’

We both agreed upon doing a faux bob. Luckily Jill [Buck] was with me passing me bobby pins, passing me curling irons, getting out kinks from the bun…all while we were changing her. So I did a ten-minute faux bob and she goes off to take pictures in her new dress.

"For the second part of the day right after the ceremony, I intensified the eyes," Barnes explains. "I did add a little bit of sheen and luster to catch a little reflection in the nighttime hours, but we stayed with the same neutral palette. It was just a little more defined, a little darker on the eyes, I used some metallic bronzes on the lid, a little bit of gold and then added just a tad more eyeliner and smudged it at the lash line."

"All of her bridesmaids and her best friends, we surprised her with doing one of her dance routines from the Move Live tour," Capri shares. "She had no idea what was going on. After that dance she was so excited and standing on the chair, which was when we did another hair change and a skirt change. All the girls were gathered around. Anita [Patrickson] helped with the skirt as I was taking out all the bobby pins of her faux bob and pulling her hair down. She was just free in her bodysuit with her long blonde hair down for the rest of the night." 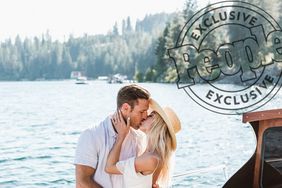 Every Outfit Julianne Hough Wore During Her Wedding Weekend 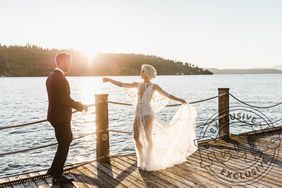 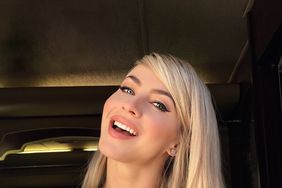 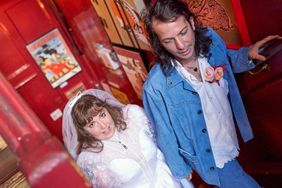 Julianne Hough's DWTS Photo Diary: Week Four Is All About the Elegance

Julianne Hough's DWTS Photo Diary: Week 3 Is All About the '70s

Julianne Hough's DWTS Photo Diary: For the Finale, Her Dress Was a 'Jolt of Sunshine'

Julianne Hough's DWTS Photo Diary: Week 10 Was All About the Vintage Appeal