JoJo Siwa built her multi-million dollar brand empire on glitter, neon and bows. During her years as a Nickelodeon fixture and YouTube sensation, she was almost always spotted rocking a maximalist combination of all three.

But as she's expanded her brand in the past few months with a groundbreaking stint on season 30 of Dancing With the Stars, Siwa's style has evolved.

On Tuesday morning's episode of The View, the star — who made it to the finale of DWTS and was the first person in the history of the ABC competition show to compete with a same-sex partner — opened up to cohost Whoopi Goldberg about wearing heels on the American Music Awards red carpet Sunday.

Looking glamorous for the talkshow appearance in a blue belted sequin jumpsuit, Siwa said, "I've been wearing heels for two days straight. It's a new thing."

"I have to tell you, as someone who often wore boots and sneakers with glamorous dresses, it can be done. But maybe you want to try all of the footwear," Goldberg joked.

"Absolutely, and I trust my people. That's one thing about me, I really trust the people around me. I trust my mom, I trust my family, I trust my friends, I trust Jen," Siwa replied. "And right now, the two biggest people in my life are my mom and Jen, so trusting them was a no-brainer. I was like, 'They got my back. They're gonna steer me right.'"

Last month, the star made a TikTok documenting her first-ever manicure, and has since ditched her signature side ponytail for different makeup looks and hairstyles.

"I am in a dress and heels the first time in my life," she said. When I knew I was coming to the AMAs, I was like, 'Oh, what am I gonna wear,' because I have had this transition while being on Dancing with the Stars where I've gone from dressing like I normally dress to looking more adult," she says. "And I want to branch out of my comfort zone, and so today we went for a dress. I got some heels on."

Siwa looked elegant in a black off-the-shoulder gown that featured a full skirt with ruffles and sheer paneling. The star told PEOPLE that she borrowed her sparkly gold Christian Louboutin heels from Johnson.

During the interview, Siwa also opened up about her breakup from girlfriend Kylie Prew.

"I was with my girlfriend for nine months. And those nine months were amazing and incredible. And obviously I've talked about [it], we broke up. And one thing that I'm grateful for is that we're both okay," the dancer-singer said. "We obviously aren't as close as we used to be, but we're both okay. And we're both happy, and that's all that matters."

The Nickelodeon star said that she's been in work mode since the breakup (the two split ahead of Disney Night on DWTS in October) but that she hasn't lost faith in love.

"I've been straight working every single day," she shared. "However, single JoJo is funny. Every day she's like, 'I want to marry somebody, and then the next day she's like, 'Ugh, I'm so happy to be single.' " 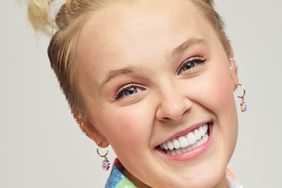