The fashion industry veteran and designer tied the knot in a rustic and romantic wedding ceremony at the famed restaurant, Blue Hill at Stone Barns — and we have an exclusive peek inside their magical day

TIME TO TIE THE KNOT

Guests enjoyed cocktail hour in the vegetable garden at Stone Barns. "They had passed appetizers that they specially designed for us," Zee exclusively told PEOPLE. "It was very unique and special and everyone loved it."

At the farm-to-table restuarant, appetizers were served on nails emerging from a plank of wood.

Younkers explained that their decision to serve small bites was inspired by the movie Mermaids. "Cher's character is obsessed with food being appetizer size. So we loved the idea of small bites."

"We wanted to keep the ceremony very fun, playful and light so we ended up having it in the same room where dinner was served," Zee said.

THEIR WEDDING, THEIR WAY

"We weren't walking down an aisle, nobody was being given away, it wasn't that kind of a thing," said Zee. "So we did our own modern, casual take on what a wedding was. There was certainly some indication of elegance about it, but it was also really casual."

Younkers's aunt, Katie Mull, served as the officiant during the ceremony.

Both men wrote their own vows and didn't share them with one another until they were at the altar. "The day of the wedding, I sat at a Starbucks at a train station in Scarsdale and wrote my vows," Zee revealed. "Yes, it is a true sign of a procrastinator but at the same time, I really feel like it's from the heart."

As soon as Aunt Katie married the pair, they hit the dance floor to Sia's "Day Too Soon."

A view of guests' lovely dinner.

Julianne Moore and her husband, director Bart Freundlich, were all smiles during the big celebration.

The couple became close with Moore's daughter, 16-year-old Liv Freundlich, after she attended their fashion design camp, Stitched, in the Hamptons. "Liv was there our first year," said Younkers. "We just became very close with them and sort of watched her grow up over the years. They're just good buddies."

Celebrity hairstylist Serge Normant also joined the festivities. "I've worked with Serge on a billion cover shoots in my career for almost 30 years," said Zee, who was former creative director at ELLE. "He's an incredible friend."

The couple chose the same style of Cartier wedding bands but in different metals; Zee picked gold and Younkers has platinum.

They wanted to keep their wedding modern and nontraditional, so in lieu of a wedding cake, they passed around desserts, like mini ice cream cones and cookies. 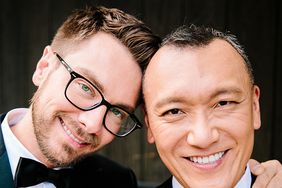 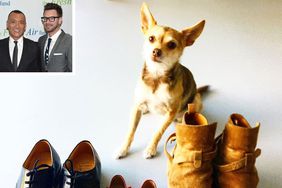 Baby on the Way for Joe Zee and Husband Rob Younkers After 2-Year Journey: 'We Are So Excited'