Plus, the Modern Family star shares the first-ever photo from his 2013 nuptials

You can always count on Modern Family‘s Jesse Tyler Ferguson and his husband Justin Mikita to come up with the most creative collaborations for their line of bow ties, Tie The Knot. They’ve designed martini-inspired styles, Bryan Cranston-themed ties and even a line based on characters from Orange Is the New Black. But now, they’re branching out with their most personal project yet — a wedding capsule collection with designs inspired by their own nuptials!

To celebrate the five year anniversary of their bow tie brand, the couple developed a new line of wedding-ready styles and they actually released the first-ever photos of their wedding day, exclusively to PEOPLE. The couple married in July 2013 in an intimate ceremony in N.Y.C. Ferguson wore a navy tux, Mikita in black, and both chose classic black bow ties.

With their four year anniversary only two months away, they based all their new tie styles off of colors and patterns from their own wedding.

You can see the cobalt-colored table cloth coming through in the blue bow ties, the swirly chair pattern on the light red design and how the lighting fixtures were represented onto some other styles.

What’s even better than the special meaning behind each design, is the fact that $20 of every $25 purchase is donated directly to Tie The Knot, a non-profit advocacy organization that promotes marriage equality, a cause Ferguson says is more important than ever to support.

RELATED PHOTOS: Score Up to 50 Percent Off at J. Crew Factory and Every Sale You Can’t Not Shop This Week (plus Exactly What to Buy)

“Tie The Knot was created to stylishly support the fight for marriage equality. Now it’s more important than ever to protect that equality won nationwide along with the many other freedoms being threatened by our current political landscape,” says the actor in a statement. “Designing our first formal wedding collection for Tie The Knot felt like the perfect way to honor the charity’s five-year anniversary and success to date while continuing to support the ongoing battle for equality and human rights.”

All six styles launch on the site, thetiebar.com, on May 16 and thanks to the tasteful patterns and versatile colors, they will fit in with any wedding guest dress code you have on your agenda this season.

Which wedding-theme bow tie design is your favorite? 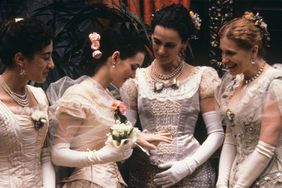