Jennifer Lopez is the queen of Italy!

On Saturday, the 52-year-old singer took part in a stunning photo shoot on a gondola in Venice during the last day of the 2021 Venice Film Festival.

She modeled a Dolce & Gabbana strapless tulle ball gown on the water. The elaborate dress featured a print of the Italian city and was accessorized with a thin black belt around the "Let's Get Loud" singer's waist.

Lopez wore glamorous makeup for the shoot as well, with her cheekbones defined and her lips covered in a bold, statement-making red lipstick.

After the photo shoot, she and Ben Affleck reportedly headed to the airport.

The night prior to her gondola moment, Lopez and boyfriend Affleck set the red carpet ablaze at the Venice Film Festival.

There, Lopez and Affleck, 49, made an entrance at the premiere of the actor's new film, The Last Duel — their first red carpet appearance since rekindling their romance earlier this year.

Lopez brought out all the bling, wearing a white mermaid-style Georges Hobeika gown with a deep neckline, accentuated with a string of Swarovski crystal embellishments. She accessorized with a Cartier bracelet, earrings, and a ring featuring yellow jewels, an embellished silver clutch, and Jimmy Choo platforms.

Affleck, meanwhile, looked dapper in a black Dolce & Gabbana tuxedo with satin lapel and Christian Louboutin shoes. The couple held hands and kissed as the photographers snapped their pictures.

Lopez (who previously was engaged to Alex Rodriguez) and Affleck (who had split from Ana de Armas) rekindled their romance in April before going Instagram official in July for the singer's birthday.

The pair originally began dating in July 2002 after meeting on the set of their movie Gigli. They got engaged that November before postponing their September 2003 wedding just days before the original date and ultimately called off their engagement in January 2004.

Since the couple rekindled their romance, they have continued to grow even closer. A source told PEOPLE in May that their relationship is different this time around. "Time has passed, and they are each in a different place with children," the insider said. 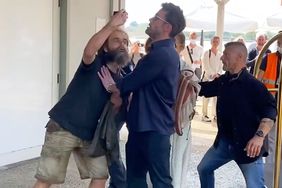