Jacqueline Bouvier’s 1953 wedding to John F. Kennedy is long regarded as one of the paragons of chic and timeless style, especially her elegant wedding gown with its off-the-shoulder neckline and full skirt. And the photos from that day are some of the most iconic ones out there. Now a rare new cache of Kennedy wedding photos has been unveiled before it goes up for auction, giving another glimpse of what was the society event of the year — and created the “Camelot” mystique.


The set of 13 photos and negatives was found in the home of freelance photographer Arthur Burges, who was a backup shooter at the wedding (necessary, considering that they hosted 1,200 guests for the reception and the event was covered by Life magazine!). Four of the photos show the couple, while two are portraits of the wedding party and the remainder are details from the big day.

PHOTOS: See what your favorite stars are wearing this week!

In the photos here, Jackie is seen holding her bouquet next to her new husband outside the church, cutting the cake as an eager flower girl looks on and chatting with one of her attendants in a group shot. Her voluminous lace veil cascades down the back of her Ann Lowe dress (the same designer who made her bridesmaids’ pink taffeta gowns). And interestingly, though one of the most famous published photos from the wedding shows the newlyweds cutting the cake outdoors, Burges’s photo portrays them cutting an identical cake in front of a set of windows.

Though Jackie’s wedding dress is considered a classic, at the time, she didn’t care for it at all, according to Time. “She had wanted a simple dress with sleek, straight lines, but bowed to family pressure to wear something more traditional, despite thinking it looked like a lampshade,” the magazine states, citing the book What Jackie Taught Us. It also adds that a pipe burst in the designer’s studio a week before the wedding, and she and a team of seamstresses has to replicate eight weeks of work in seven day to be ready for the wedding.

More details on the October auction of these photos can be found at RR Auction. What do you think? Do you love Jackie’s dress?
–Alex Apatoff 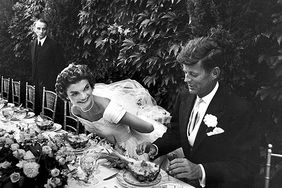