Amy Schumer on Where She Gets Her Confidence: 'My Parents Made Me Think I Was a Genius Supermodel'

Amy Schumer isn’t exactly the shrinking violet type. This is the woman, after all, who threw herself on the ground at Kimye’s feet, regularly discusses the finer points of her sex life and her secrets to preventing thigh chafe in front of audiences of thousands, and writes scathing satires and musical numbers about dismantling the patriarchy brick by brick. So now that InStyle has undergone a bold new relaunch of its own under the leadership of Laura Brown, it only makes sense that they would opt for the equally brazen comedian to inaugurate their first ever beauty issue, clad in a plunging white swimsuit, no less.

For her first ever InStyle cover, Schumer was photographed by Carter Smith in a Lauren Ralph Lauren swimsuit, half-submerged in a pool. Inside the issue, she’s interviewed by her friend Jessica Seinfeld, touching on far-ranging matters from her undying passion for white wine to her fears (or lack thereof) about aging. Speaking to the decidedly feminist, often controversial, bent of her work, she said, “I think frustration is good. I just want to make people laugh, but I’m also in a place where I want to make change. A joke doesn’t have to be something that’s going to make people think, but if it can, that’s better.”

From Coinage: Tips for Planning a Wedding on a Budget

But, then again, there are also those times when you might prefer to think a little less, and for that the actress turns to her beloved pinot grigio. While she says, “In the past couple years there have been times when I haven’t drunk for months,” she quickly adds, “What I find is I look so much better, feel amazing…and am so bored. Life isn’t that fun. So I can feel really good for a while, but then it’s one of the things that I look forward to, so until I am told ‘You cannot do this anymore,’ I’ll probably continue to do it.”

Something else she looks forward to might surprise most people in Hollywood: getting older. Schumer admits that the idea of aging doesn’t faze her one bit. “What’s good about not being a model is that it’s not the thing I trade on,” she says. “Once I start looking older, that won’t affect me. I have never gotten anything done because I’m, like, so gorgeous. I’m good-looking enough that I can work in the business. I get enough attention from men that I feel good. I see pictures of myself now, and I look younger than I think of myself. It hasn’t scared me yet.”

Which also means you won’t find her jumping aboard the Botox and filler bandwagon anytime soon. She jokes, “…I cannot imagine a moment when I will need filler for my face, as if it needs to be filled. Can we unfill this? Let’s get an emptier.” Likewise, you’ll never see her transform into a total clotheshorse, saying of her relationship to fashion, “We’re friends who have an appreciation for each other but don’t ever hang out—and we don’t even pretend to make plans anymore.”

But whether she’s wearing the latest in couture clothing or not, Schumer is all about the kind of confidence that radiates from the inside out. “My parents made me think I was a genius supermodel,” she jokes, “and it was kind of too late when I found out that they had been lying.”

What do you think of Amy’s InStyle cover? Sound off below! 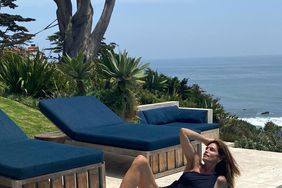 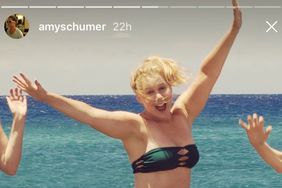 Take That, Haters! Amy Schumer Fights Back at Her Body-Shamers by Sharing Bikini Photos 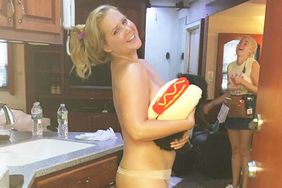