Styles is reportedly dating the French fashion and film star

The former One Direction singer, 23, is rumored to be dating Victoria’s Secret model Camille Rowe, 27, according to reports by The Sun which also claim that the pair were seen spending time together over the weekend in New York City.

So, naturally, interest into who Rowe is and what she does has spiked as of late, particularly amongst Styles’ diehard boy band fans.

While Styles was recently ranked as having the world’s most handsome eyes and chin, he still hasn’t been able to make a full time career out of his good looks, unlike Rowe. The French fashion star has been modeling professionally since 2008, when she was scouted on a break from her university sitting at a cafe, subsequently appearing in ads for brands like Dior Homme with Robert Pattinson, Louis Vuitton, and Tommy Hilfiger. She’s also landed a number of prestigious magazine covers such as Vogue Paris, L’Officiel, Elle, and Marie Claire.

In 2016, she booked a prestigious role on the Victoria’s Secret runway, making her the fourth lingerie model Styles has been linked to, including Sara Sampaio and Nadine Leopold. He previously dated another high-profile Victoria’s Secret model and reality star, Kendall Jenner, as well as Taylor Swift.

In addition to her high-flying fashion jobs, Camille has also dabbled in acting, appearing in the French film Our Day Will Come alongside Vincent Cassel, and starring in music videos for The Strokes and MGMT. In April 2016, she was also named Playboy Playmate of the Month.

During a segment on the Breakfast Show with Nick Grimshaw on BBC 1 Radio, Styles’ friend and host Nick Grimshaw showed the singer an image of Rowe, while the Dunkirk star was hooked up to a heart monitor. While his heart rate remained low (remember his true love is Chelsea boots) the singer added coyly, “I don’t know her, but I’m sure she’s a wonderful person.” (He also hid is face behind the mic as the camera panned away, which left fans suspicious.) Watch Styles’ answer the Rowe question above at the 2:45-minute mark. 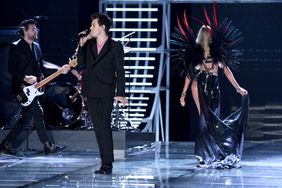 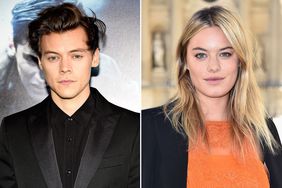