The supermodel graces the cover of ELLE's March 2020 issue, out today

He’s a teen heartthrob-turned-record-breaking musician and she’s the supermodel daughter of actor Stephen Baldwin, but life at home with newlyweds Hailey Baldwin and Justin Bieber is surprisingly relatable.

The 23-year-old beauty graces the cover of ELLE’s March 2020 issue, out today, where she reveals that quality time with her husband consists of cuddling, playing with their adorable cats (Sushi and Tuna) and watching Friends reruns.

“I definitely enjoy being home more than I enjoy being away,” Baldwin — who sported beachwear, including a white one-piece and shorts set, a yellow rash guard and a black string bikini, for the ELLE cover shoot — told the outlet. “I try to read more than be on my phone in bed. We have a rule: No phones in bed unless it’s absolutely necessary.”

Despite their short engagement and surprise courthouse wedding in 2018, Baldwin and Bieber’s relationship spans over 10 years (they met in 2009 at one of Bieber’s concerts, and dated on and off from 2014-2018).

The supermodel, who married Bieber for the second time during a South Carolina ceremony in September 2019, told ELLE she was “shocked” by how much he had grown up when they officially reconnected a few years ago.

“I think I had grown up a lot, too,” she added. “He was somebody I’d always cared about so deeply and loved very deeply. Obviously, it took work and getting past things between the two of us, but it was all very worth it. He’s an incredible, amazing man and such a good partner to go through life with. There is no one else I would have ever wanted to spend my life with except him. So, I’m lucky.”

But their first year of marriage hasn’t been all bliss — the “Yummy” singer recently revealed he has been suffering from Lyme disease, which went diagnosed until late last year. Bieber reportedly received countless treatments that only made his symptoms worse.

Baldwin explained how her husband’s health added to the stress of newlywed life.

“When we first got married, we were just figuring out our life together. I felt like putting a wedding in the middle of all of that would be really hectic and stressful,” she told ELLE. “He was really sick. He has Lyme disease, and he was dealing with a bunch of medical stuff. We didn’t have a diagnosis.”

She continued: “And it was hard because everybody from the outside was being super mean and judgmental, saying he looked like he was on drugs, saying how unhealthy he looked, when in truth, he was not healthy and we didn’t know why. It was months of me being a new wife trying to help him figure out what was wrong and what was going on. Now he’s perfectly healthy. But going through that and then trying to be like, ‘So where does our wedding fit into this?’ didn’t feel like the vibe at all.”

Through the ups and downs, they both have kept faith at the center of their relationship (both are devout Christians and members of Hillsong United).

The supermodel started attending the megachurch at age 16. She said it provided a strong sense of community and allowed her to develop her own relationship with God, separate from the one she inherited from her parents: “That’s been a cool journey for me,” she shared.

“Being able to share that with each other—to have that bond of faith and spirituality—is so [critical] for [me and Justin],” Baldwin said. “It’s the most important part of our relationship, following Jesus together, being a part of the church community together. It’s everything.”

The March issue of ELLE hits newsstands on February 18. 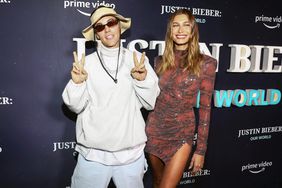