In honor of her 49th birthday, the actress got candid about cosmetic procedures and unrealistic beauty standards

The GOOP mogul (who turned 49 on Monday) recently sat down with Merz Aesthetics Chief Scientific Officer, Dr. Samantha Kerr, and other industry insiders at the Crosby Street Hotel in New York City to chat about the latest innovations in skincare and anti-aging treatments.

During the conversation, Paltrow got candid about modern beauty standards, the importance of self love, perspective that comes with getting older and her all-time favorite birthday memory (spoiler alert: our favorite Libra said she's a "massive birthday person" and it's her "favorite day of the year").

"I had a small one a few years ago where my husband, Brad [Falchuk], had everybody write me a haiku and read them out loud at the table. Then at the end of the night, I got all the haikus," the Oscar-winning actress shared. "It was really sweet."

Paltrow (who opened up about her decision to try Xeomin — an injectable that smoothes fine lines using a uniquely purified formula that removes unnecessary proteins — last year) also shared her opinion on stereotypes surrounding cosmetic procedures.

"What I don't like about the judgment piece is it implies that, as women, we are supposed to be perfect forever without help," Paltrow shared. "It's part of this weird perfectionism thing that society kind of beholds us to."

"Like no! We age. We're flawed," she said, explaining that women often think, "'I'm not going to admit [to getting work done] because I have to look like if I woke up like this.'"

"I actually think it's damaging to other women's confidence," the actress added.

In fact, Paltrow is so passionate about ending the stigma, she built her GOOP lifestyle empire around the idea of being an "open book" — especially when it comes to sharing beauty products and treatments that actually work — and tackling taboo topics like aging.

It's no secret that the multi-hyphenate star takes her beauty regimen very seriously, but Paltrow says the work she does on the inside has become increasingly important as she's gotten older. One of the first people to impart their wisdom about confidence and self-love on a young Paltrow was none other than Diane von Furstenberg.

"She's the biggest advice-giver you'll ever meet, and she really has incredible things to say," Paltrow says of her fashion designer friend, 74. "She always talks about the relationship she has with herself. That's something that really stuck with me. She first said it to me when I was in my 20's. She was like, 'You have to be your own best friend.'"

Paltrow jokingly admitted that she "didn't even know" what that meant at the time and didn't pay much attention to Furstenberg's routine of looking in the mirror and saying "I love you" on a regular basis. But about a decade later when Paltrow was in her 30's, she said the advice finally clicked.

"It's so important to truly understand what it means to be your own best friend. [It means] that you can rely on yourself, be there for yourself, eliminate that negative self talk and regard yourself as whole and beautiful," the Goop mogul shared.

When asked about her beauty icons, Paltrow again emphasized the importance of inner-strength and self-confidence.

"When I was 25, probably Christy Turlington. Now, I don't know....I find women so beautiful. I don't have [just] one. I like women who are confident and carry themselves beautifully and you get the sense that they like themselves."

Speaking with PEOPLE last year about her beauty philosophy, Paltrow said, "For me, it's about deepening happiness versus trying to chase youth." 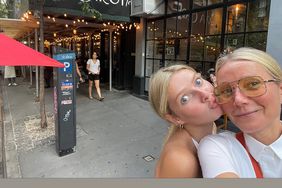 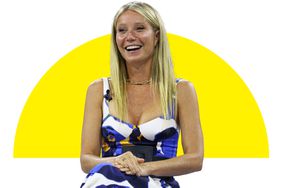 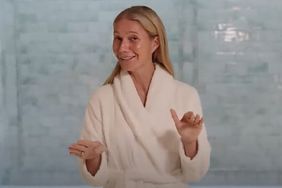