Ahead of Sunday night's show, we're revisiting some of the most memorable looks in Grammys history

At the 26th Grammy Awards, the Eurythmics singer was hardly recognizable in menswear (she's on the left).

If anyone can make head-to-toe polka dots work, it's Prince.

The actress showed off her baby bump (she was pregnant with son Jaden at the time) in a shimmery, sheer dress.

No Grammys flashback would be complete with J. Lo's iconic Versace dress. "We hit the red carpet and it was a frenzy," Lopez later recalled. "There was an extra kinetic energy there."

The "Complicated" singer's suit made a rock 'n' roll statement.

Before Yeezy, Kanye wore sunglasses — indoors and out — paired with gloves.

Not only did the rapper walk the red carpet nine months pregnant, but she performed at the Grammys that year too!

Mother Monster always does her own thing. She arrived at the 2011 Grammys in an egg. "I really wanted to be born on stage," she recalled to KIIS-FM. "The creative vessel was helpful for me to stay focused."

Minaj posed with the "pope" on the red carpet. Her performance that year — which featured an "exorcism" of sorts — received backlash from the Catholic League for its religious imagery.

Ah, the hat that will forever be meme-ified.

The Queen of Pop always keeps it flashy. She even flashed her rear on the red carpet in this lacy number.

Almost one year after they wed, Kimye hit the red carpet together.

The golden girls ruled the red carpet in their complementary jewel tones.

Gaga used her walk down the red carpet to pay tribute to the recently deceased David Bowie.

Then pregnant with twins Rumi and Sir, Bey stunned in her shimmering, cut-to-there red gown.

The singer brought daughter Willow as her date in a similarly feathered dress — and nothing has ever been cuter.

The rapper was practically a work of art, choosing a vintage Mugler design from the label's fall 1995 archives.

In another hat-becomes-a-meme moment, Porter walked the carpet in a flat-brim hat featuring by Sarah Sokol Millinery — and the fringe could actually close by remote control to conceal the star's face.

The relative newcomer really leaned into the "Old Town Road" of it all in a hot-pink cowboy-inspired ensemble. 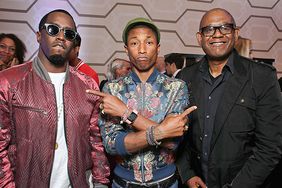