It's never too late to reinvent yourself in Hollywood. For Steve Harvey, this means hype beast-approved Bottega Veneta leather pants, head-to-toe Tom Ford and look #33 straight off the Fendi Fall/Winter 2021 runway.

The Family Feud host, 64, has always had fun with fashion — we're talking about a man who once wore a blue suit embellished with bedazzled spiderweb and red sequin elbow patches on live television — so his current affinity for bold colors and unconventional silhouettes while on a Paris getaway with his super-stylish wife Marjorie isn't too surprising.

But lately, Harvey has been steering away from quirky camp and leaning into high fashion with the help of stylist Elly Karamoh, and, of course, the Internet is loving it. His influencer-esque poses and impressive OOTDs have inspired viral Tweets and memes, with several people photoshopping the TV personality into cartoon characters.

"Steve Harvey is either dropping a new clothing line or wants to remind the world he's wealthy," one fan wrote on Twitter. Someone else joked, "babe wake up, new steve harvey pic dropped."

Along with his Bottega Veneta leather pants (which he teamed with a cobalt blue Berluti jacket), his gold-leaf-embellished silk Tom Ford suit and his all-black Fendi look, Harvey has also worn a green Bottega Veneta monochrome look paired with maroon shoes, a Mark Weston-designed Dunhill kimono and an elevated version of the Canadian tuxedo.

Harvey has yet to reveal the motive behind his style evolution, but we can't help but wonder if daughter Lori Harvey's best-dressed boyfriend Michael B. Jordan has something to do with it.

In a recent interview with Entertainment Tonight, the TV host said he wasn't sure what to expect when meeting Jordan, 34, for the first time, but has since realized he is "a good guy."

"He is genuinely who he who he looks like he is," the comedian told the outlet. "I mean, like, it threw me off at first, because he was so kind."

"You know, I figure, 'OK, this is the game right?' But it wasn't, man," he said, adding, "this dude was sincere and he's proven to be a really, really good, good guy. I'm pulling for him, you know, for them."

Lori, 24, and Jordan made their relationship Instagram official in January after rumors of their romance blossomed in late 2020.

Steve shared similar sentiments with PEOPLE (the TV Show!) senior correspondent Jeremy Parsons on Monday. "I don't speak publicly about this type of stuff, but I'm happy for my daughter right now. I really am," he said. 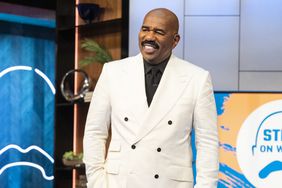 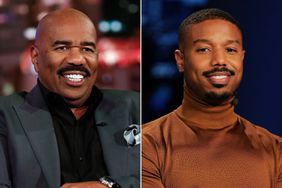 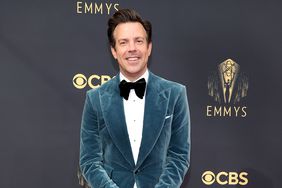