Mary-Kate and Ashley Olsen loved a party just like any other NYU freshmen – the only difference is that theirs involved rubbing elbows with A-listers and being clad in couture. (Though no, you're not alone for thinking that they look like they just stepped off the set of New York Minute.)

It was a British invasion on the red carpet at the 2006 Met Gala – which may explain why the twins went for a more prim and proper fitted look than their go-to "bag lady chic" NYU attire at the time.

The year after establishing their design cred with The Row, the sisters started showing signs of their signature design aesthetic in dresses that mirrored one another: classic color palettes, streamlined shapes and those long, loose Olsen waves.

For the superhero-themed year at the Met Gala, Ashley's superpower seemed to be reading our mind (We're thinking: 'We're jealous of your brow game') and Mary-Kate appeared to be able to make her eyebrows disappear.

The night was all about inspiring female supermodels, but Mary-Kate and Ashley seemed to be concerned with eye candy of a different kind (pictured with Josh Hartnett, left, and then-boyfriend Justin Bartha, right).

Neither twin wore Alexander McQueen, but both chose vintage gowns that had the designer's sense of drama: Ashley wore vintage Christian Dior, while Mary-Kate chose a boho-feeling Givenchy Couture gown.

Schiaparelli's signature color was hot pink ... which didn't seem to be a huge factor in Mary-Kate's dressing decisions the year she attended solo in a gown of her own design.

The emphasis was on the "chaos" part of the theme, as both sisters picked voluminous ensembles in coordinating citrus shades with tons of embellishment.

The Olsens paid tribute to the designer's classic '50s silhouette with more vintage gowns (that had us divided) – an '80s-inspired Chanel look from Ashley and a Gianfranco Ferré business-suit-esque number from Mary-Kate.

2015: CHINA: THROUGH THE LOOKING GLASS

Themes are for amateurs! The Olsens did their own thing at the event, wearing coordinating black gowns – Mary-Kate in a robe-style shearling-trimmed number and Ashley in a tiered and puff-sleeved look (both are in David Webb jewels).

Their participation on for the tech-themed red carpet was notable for two reasons: The first, they wore different colors; the second, they displayed a hint of a smile in the photobooth.

The sisters both chose heavily accessorized lace dresses for the carpet, with Ashley topping hers off with an embroidered, feather-accented jacket.

From the floaty caftan-style dresses to the iridescent statement jewelry (by Stephen Russell) to the loose waves, there weren't a lot of surprises in the designers' looks - which is just how we like their Met Gala appearances.

The stars donned complementary long leather gown/jacket hybrids with their signature boho waves and understated clutches. Is it camp? Who cares! 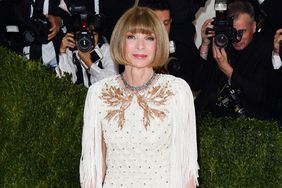