Get all the exclusive details on the Bachelor in Paradise alums Carly Waddell and Evan Bass' Neil Lane wedding bands — and Waddell's engagement ring upgrade!

Earlier this summer, Bachelor in Paradise alums Carly Waddell and Evan Bass returned to *Paradise* for the tropical wedding of their dreams. And fans of the show will witness their romantic beachside nuptials on part two of the season 4 premiere Tuesday night.

Providing a welcomed departure from Corinne Olympios and DeMario Jackson’s sex scandal, ABC will air Carly and Evan’s union at the Vidanta Nuevo Vallarta resort near Puerto Vallarta, Mexico, which of course was officiated by the host of Bachelor Nation, Chris Harrison. The bride wore a strapless fit-and-flare gown by Israeli designer Idan Cohen, featuring intricate white embroidery. She kept her beauty look beachy with a loose side-braid. And when it came time to choose their wedding bands, there was only one man to turn to: the Bachelor franchise’s go-to celebrity jeweler Neil Lane, who created two custom bands for the couple (more on those later).

But it was Waddell’s engagement ring which immediately captured our attention, and that’s because it’s totally different than the pink diamond Bass originally proposed with.

When Bass got down on one knee during the season 3 finale last September, he popped the question to Waddell with a light pink-colored pear-shaped diamond that sits atop a split band set with 157 round diamonds. Handcrafted by the Lane, the 1.5 carat ring captured Bass’ attention immediately, as the jeweler told PEOPLE at the time, “Evan described Carly and how much he loved her quirky personality and how he wanted something completely different.”

Fast-forward to this year, when the couple went to be fitted for their wedding bands and ended up leaving Lane’s Los Angeles storefront with some new bling — and a second proposal!

“Carly absolutely loved the ring Evan proposed with, but she had always fantasized about a cushion-cut diamond,” Lane tells PEOPLE in a new interview. “When she saw this ring in the case she kept palpitating and she was overwhelmed. She kept looking at it. She was distracted and Evan was like, ‘Hey babe, what’s up?’ And she told him she always imagined a cushion-cut diamond. But she didn’t want him to feel hurt.”

In the end, Bass wanted his bride to be happy. The couple consulted with Lane about switching the rings, and he was on board.

“This never happened in all my years working with the show,” Lane shares. “I wanted to be part of the occasion. Carly jumped up and hugged me and Evan was beside himself. So he got down on his knees and re-proposed with that ring. It was so special. There was lots of tears. They were crying … my staff was crying!”

Waddell shared the moment on her Instagram account, writing, “Thank you so much @neillanejewelry for my engagement ring and our wedding rings! We got to spend a few hours with Neil and his amazing team looking though the most stunning rings I’ve EVER seen! Can’t wait for y’all to watch us exchange these rings tonight.”

So what happens to the first ring? It’s now tucked away in Lane’s archives.

The new engagement ring is a cushion-cut diamond set in platinum surrounded by diamond halo, set on a band featuring 50 smaller round diamonds with a total weight of 2 carats.

As for the couple’s wedding bands, they got creative. Waddell’s handmade eternity band features 36 round diamonds set in rose gold.

“Carly’s so vivacious and bubbly and she wanted a ring that was a little different. We came up with this design with a little movement,” Lane says. “She loved the idea of going fashion-forward and mixing the platinum engagement ring with the rose gold band.”

“The lines in the ring don’t stop. It’s a sign that they will work through whatever happens in their relationship,” Lane explains. “It symbolizes their strength as a couple and how everything comes full circle.”

With a magical wedding behind them and a baby on the way, the meaning behind Lane’s ring designs definitely seem to be ringing true for the couple.

What do you think of Waddell’s ring swap? Do you love her rose gold band? Share below! 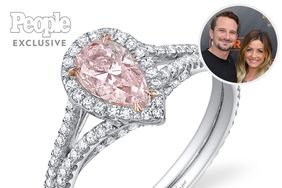 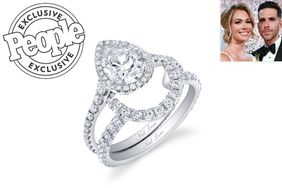 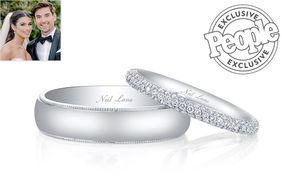 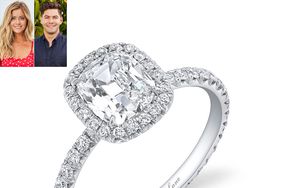 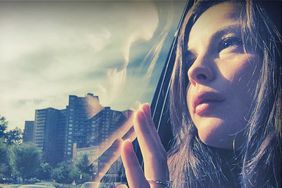 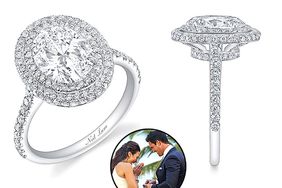 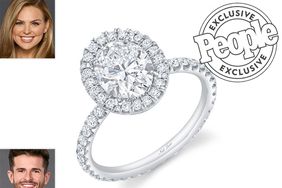 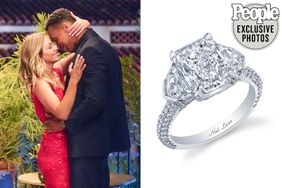 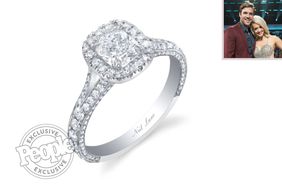