Plus, the model explains why she wore a yellow suit for her big day

Celebrity proposals usually involve a large diamond ring. But when Emily Ratajkowski got engaged to her now husband, Sebastian Bear-McClard, he didn’t have a ring at all — and instead used a paper clip to show his commitment to the star.

In an appearance on The Tonight Show Starring Jimmy Fallon, the I Feel Pretty star tells Fallon about her nontraditional proposal, which she originally declined.

“He proposed to me at Minetta Tavern and he didn’t have a ring, so I was like mmm, nah,” she shares. “And then he took the paper clip that the bill was paid with and made me a ring, which I actually thought was really romantic.”

RELATED PHOTOS: Photo Proof That Emily Ratajkowski Is the Instagram Swimsuit Queen of 2018

And when it came to choosing wedding bands, the two again opted for something a bit out of the ordinary. The star explains that they walked into China Town and bought an ounce of gold, which he planned on melting down and shaping into rings. But when Ratajkowski didn’t see that as a successful plan, they turned to an Israeli jewelry designer for some help.

“We came into his studio after hours and we like actually hammered them out, the whole thing, used a little blow torch. They were supposed to be temporary rings but now I’m very attached and I really don’t want to get rid of it. And I just feel like, making it yourself, could you be more personal?”

As for her wedding, Ratajkowski explains that they both wanted something low-key, adding that the yellow suit that she got married in was supposed to help her go incognito.

“I guess I didn’t really know what I always wanted to do which is why I wore a mustard yellow suit and a black hat, which was all part of my plan to not be noticed,” she tells Fallon. “Everyone wore suits or sweatsuits and my husband is good friends with The Fat Jew — The Fat Jewish on Instagram — they went to high school together, they grew up together. And he wore a white jumpsuit, like sweatsuit, so I was thinking that he would be the decoy.”

But of course, she was noticed. “It truly didn’t work out quite as I imagined,” she jokes. 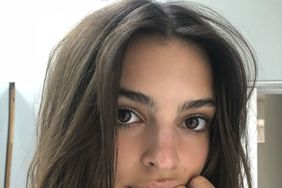