Drake and Rihanna are all but confirming their rumored (and highly hoped for) romance. The latest evidence? Matching tattoos.

Just days after Rihanna showed off her fresh ink of a camouflage-print shark on her ankle, the Canadian rapper appeared to have the exact same tattoo on his right forearm during the New Orleans show of his Summer Sixteen tour on Friday.

The fierce animal tat looks as though it’s modeled after a stuffed animal that Drake, 29, was holding in the photo he posted congratulating the 28-year-old entertainer on the night of the VMAs.

Eagle-eyed Aubrih shippers on Twitter suspect the photo and the cute gift were likely from the late-night date to the Toronto aquarium the duo had earlier this summer.

Popular celebrity tattoo artist Bang Bang had the honor of inking RiRi, and he shared a picture of the new artwork on Instagram.

The duo have been teasing their romance since Sunday night’s MTV Video Music Awards, where Drake professed his longtime love for the “Work” singer. They continued sparking relationship rumors with numerous date nights in New York City.

Are you a fan of Aubrhi’s matching shark ink? Is this a not-so-secret declaration of their relationship? Let us know your thoughts! 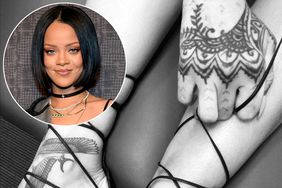 Rihanna Gets a Shark Tattoo and It's a Secret Love Note to Drake: Here's Why 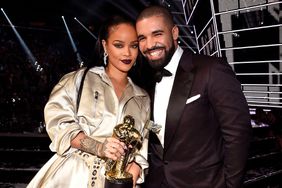