Dove Cameron Claps Back at Critics After Posting Braless Photo: 'This Is Being a Role Model'

After Dove Cameron was trolled for posing as a "pinup girl," the actress defended her choice

The Descendants actress, 23, posted two selfies on her social media Tuesday, both photos showing the former Disney star in a white tank without a bra underneath.

While she was trolled for posing as a “pinup girl,” Cameron defended her choice.

“Women HAVE a history that has been systematically suppressed. Our collective spirituality has largely been tainted to fit the needs of men and those in power,” Cameron’s first caption read, quoting The Girl God author Trista Hendren. “Our girls deserve better. The time to introduce feminism and woman-centered spirituality to ALL children is now.”

In a follow-up post in the same outfit, the actress included a quote by the author of Singing Woman: Voices of the Sacred Feminine, Elizabeth Eiler, discussing the idea of a “feminine principle.”

Meghan Markle’s Close Friend Claps Back at ‘Trolls’ with Bikini Photo: ‘I’m Proud of My Body’

“In such times as these, women are able to look at themselves with new concepts of value and brilliance,” the caption said. “However you inhabit and express being Woman, embrace yourself in that way today!”

Both posts have tracked over a million likes, and while many viewers supported her body positivity posts, other critics were not as pleased.

Cameron received comments telling her to “delete this” or claiming that her posts involved “nudity.”

Another user commented, “Honey, What are you posting? You’re a professional actress working with Disney…”

However, Cameron was quick to stand up for her strong feminine beliefs, shutting down the idea that her posts could not be seen as inspirational.

“I agree with you in the sense that it is not that deep or groundbreaking whatsoever,” Cameron responded to another. “But it’s only a big deal because this society is so beyond backwards that they have demonized basic anatomy and are very ! up ! in arms ! about female bodily freedom.”

Despite the criticism, one of her biggest supporters of the post was Riverdale‘s Lili Reinhart‘s mom, Amy, who put Cameron’s post into an interesting perspective.

“So Dove showed that she had nipples today. Did people think she didn’t have any?” Amy captioned a post on her Instagram account, which her daughter quickly reposted in her Instagram story. “Mass shootings are horrible. These are just boobs.” 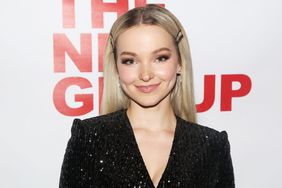 Dove Cameron Claps Back at Her Disney Fans for Chastising Her Sexy Bikini Video: 'Please Calm Down'