Check out her new line, The Princess Collection

If you thought Courtney Reed, the actress playing Princess Jasmine in Disney’s Aladdin on Broadway, was only skilled at singing, dancing, acting (you know, being a Broadway star), you’re mistaken. She also designs chokers. Reed started a line called Gagged dedicated to the popular jewelry trend, and it features everything from delicate pieces to stand-out, blingy designs. But her latest collection is inspired by something very close to her heart: Disney princesses!

“I’m obsessed with princesses,” she tells PeopleStyle. “I mean, who’s not? With the success of the Broadway Collection, we thought, ‘Oh my gosh! What if we did a Princess Collection with our favorite Broadway divas modeling them?’ It has been such a blast.”But Reed says she couldn’t have done it without her models, who are also Broadway princesses! In the photo above Reed is wearing Jas (of course!), Sierra Boggess modeled Mermaid with the matching bracelet, Flounder, and Carleigh Bettiol in Muse.

While Lexi Lawson modeled Wayfinder, Ariana DeBose in Nola and Eva Noblezada was decked out in Willow.

RELATED PHOTOS: Every Time Blake Lively Compared Herself to Disney Characters (and Was Spot on!)

As if her day working on Broadway isn’t busy enough, she says she makes up to 30 pieces a day. “I try and make chokers literally any time I have down time. I even make them when I have friends over. I made seven [a day] when I first started. I’m much faster now.”

Reed says it all started when she tested out her designs with the ladies of Agrabah in Aladdin. When two actresses wore her designs in the show “people gained interest right away,” she shares.

Want to see more of Reed’s princess-like life? Be sure to follow along as Reed takes over PeopleStyle’s Snapchat today. 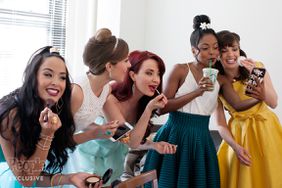 A Day in the Life of a Modern Disney Princess