Courteney Cox is still working on her beauty influencer potential.

On Tuesday, the actress, 57, posted what had the potential to be a cute time lapse of her glam squad getting her ready, set to "Kiss Me More (feat. SZA)" by Doja Cat. But about halfway through the clip, the record scratched and Cox appeared on screen with black powder covering the tip of her nose.

"I didn't do anything!" she protested, as her makeup artist asked why she botched the pro job. "I just wanted a little powder. It's not the right...it's the brush. It's the wrong shade."

"Why did you have a brush that [has] black in it?" the Friends star asked her makeup artist, Debra Ferullo.

The group quickly realized the brush was covered in black shadow because Ferullo used it to hide her famous client's gray roots.

"You covered my grays, then I put it on my nose? Great," Cox joked.

"Maybe I should leave it to the professionals… or should I?" she captioned the Reel.

Despite the makeup fail, Cox's fans and followers thought the final look was a success. "So stunning," one person wrote. "the most beautiful 😍" someone else said.

The actress is currently filming Starz's upcoming horror-comedy series, Shining Vale. On Thursday, she took advantage of Instagram's popular Reel feature again — this time to document what she does during her breaks.

"Here I am on the backlot of Warner Bros. filming my show, Shining Vale. There's definitely a lot of time in between set-ups, but I don't get bored, no," she says in the clip. "I see opportunity all around."

Fifth Harmony's "Work From Home" then begins playing over a montage of Cox doing odd jobs, including administering a COVID-19 test, serving lunch and hopping behind the wheel of a golf cart to helm a studio tour.

"We're at stage five, which is right here on our right," she tells fans. "This is where Friends started in 1994, and is now occupied by a show called Shining Vale, starring me." 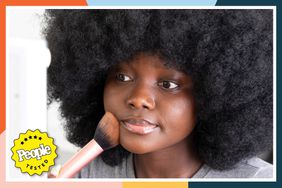 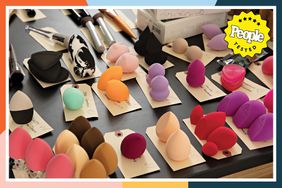 The 4 Best Makeup Sponges of 2023, Tested and Reviewed