Courteney Cox knows how to have fun in the summer heat.

The Friends alum spent her Sunday afternoon poolside, rocking a little black string bikini that showed off her lean physique. She shared her fun afternoon with an edited video, in which she fell into her pool but then reversed the footage, all set to the soundtrack of Missy Elliot’s hit song “Work It.”

“Oh so now I finally get what @missymisdemeanorelliott meant by put your thing down, flip it, and reverse it….only took me ten years,” Cox wrote on Instagram alongside the video.

The video starts as Cox is effortlessly reversed out of the pool, her light robe draped back over her shoulders as she is handed a cold drink and her sunglasses before she takes a sip.

Friends were quick to drop comments on the actress’ video, with Busy Phillips commenting, “This is great.❤️”

Cox is known to share some funny videos of herself on her Instagram, previously posting a few where she used various, distorting face filters. In a more recent one, she played on the classic “I got your nose!” trick with a filter that removed her nose. 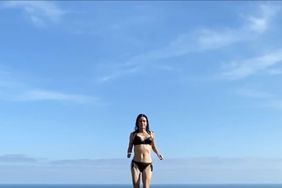