The pair made their first public outing as a couple on Friday, appearing at an LGBTQ fundraiser

Ava Dash and Conor Kennedy made their first public outing as a couple on Friday, appearing at an LGBTQ fundraiser in the Hamptons.

Dash, a 21-year-old model and popular Instagram influencer, and Robert F. Kennedy's grandson, 26, have been dating for months, a source tells PEOPLE.

The insider says the couple met in 2019 through mutual friends, but they "never really bonded until they both stayed at a friend's house in the Hamptons for Conor's birthday weekend last August."

"Normally there are so many other friends around, but since it was just them at the house I think they really got to connect," the source says. "After that weekend, they had flown back to L.A. together and have officially been dating for around seven months."

The source adds that "they spend almost every day together."

Photos from Friday night's cocktail dinner party, which required proof of COVID-19 vaccination to enter, show the couple among other attendees — including model Monika Clarke and Noor Pahlavi — having drinks and dancing around an Alice In Wonderland-themed backyard.

Andrew Warren, a New York socialite who co-hosted the event, tells PEOPLE that Conor and Dash, the daughter of fashion designer Rachel Roy and record label executive Damon Dash, flew in for the party and helped set up ahead of time.

The couple have been living in Los Angeles due to the pandemic.

Dash and Conor were photographed twice last year: at an N.Y.C. fashion event last February and once more last summer, when they posed for photos shared on Instagram by Warren.

"They are both really good people and amazing friends and I hope they end up together, not just because I love them both but because I can tell they're both genuinely happy," Warren says.

Friday's event was part of a fundraiser for Keshet, an LGBTQ organization that promotes inclusion and equality within the Jewish community.

The party was in partnership with the Lox Club, a membership-based Jewish dating app. Organizers tell PEOPLE they raised $25,000 in recent days.

Dash commented on photos Warren later shared on Instagram from the party, calling him the "hostess with the mostest."

For the evening, Conor wore a faded jean jacket and unbuttoned top, while Dash donned a black and red dress with a crown.

Conor briefly dated Taylor Swift in 2012 but has maintained a relatively low profile since then. 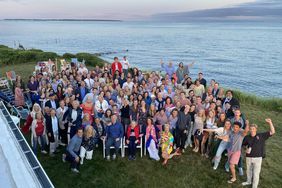