She may have been the picture of the glamorous Hollywood golden girl in her Armani Privé gown at the Emmys, but at home, Claire Danes is closer to Martha Stewart. “I am feverishly decorating,” the star told PEOPLE at Valspar Paint’s exhibition benefiting United States Artists in N.Y.C. Danes, along with husband Hugh Dancy, recently purchased a country home in New York’s Hudson River Valley, and having just celebrated their one-year anniversary, the couple is in full-on nesting mode. Danes confesses she’s obsessing over everything from lighting fixtures to what color to paint the library. (“I say library, it sounds very grand,” she clarifies. “It’s not.”) Either way, the newlyweds couldn’t be happier playing house. “We bought a fairly old home and it’s the first time I’ve ever lived in an actual house,” Danes said. “I grew up in a loft in [Manhattan’s] SoHo, so it’s completely exotic and novel for me to have a basement and an attic and stairs even! It’s a real adventure.” And rather than hit the latest hotspots, Danes and Dancy are content to keep it local. “Hudson is a great hub for antiques,” she says. “Warren Street is the strip and it’s just fantastic. It’s like my Disneyland.” Another favorite venue? “There’s a great auction house near us that we go to. A lot. You can eat chili and brownies and just buy antiques. It’s heaven!” And even when she doesn’t leave her “minimalist, mid-century” digs, the star indulges her passion for design. “I’ve discovered the wild world of the Internet. I’m an avid 1stdibs.com peruser and eBay peruser. Etsy.com, VandM.com—I love them all. It’s really addictive and I’m very vulnerable to it all. I find it very seductive,” she says. “I will shop anywhere.” –Suzanne Zuckerman

Claire Danes Dyes Her Hair Darker With a Hint of Red

Claire Danes's Emmys Hair: Should She Cut It For Real?

Whose Makeup Made a Statement at the Emmys?

Claire Danes: Am I a Natural Blonde? 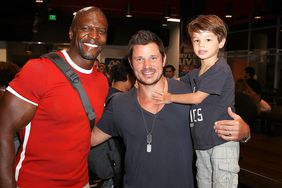